The most cunning serpent

Tempted by the devil 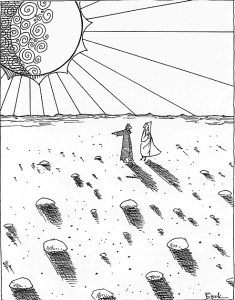 There are voices in the desert, as Lent arrives.

Matthew’s Gospel begins with the voices in the desert. The voice of John is a voice of one crying out, “Clear the way of the Lord.” And then there is the voice from heaven making its announcement at the baptism of Jesus: “Prepare the way of the Lord, make straight his paths.”

And there is the voice that is featured today, the voice of Satan.

Matthew and Luke are the two Gospels that give us the story of the three temptations. But Matthew arranges them differently from the way Luke has them. The first two temptations are about bread and the temple. The discussion about bread seems to warn against limiting human need to the physical. We are made for more than comfort. The exchange about the temple seems to warn against the false concept of religion that would assume too much. Life is about more than complacent security.

Secondly, we discover that the price for all this is to worship Satan. We have here a thinly veiled commentary on empire-building as a project. Matthew knew this well, and he was writing up the story of Jesus to reflect the experience of his own, later history. Between the time that Mark was writing his Gospel, and Matthew following up on it, Rome had destroyed Jerusalem and its temple. The Great Revolt of 66-70 A.D. had prompted the Roman response. Things would not be the same afterward. Matthew was writing in the aftermath, finding lessons in Jesus’ story for the disarray of Judaism in his day.

We see this further in a few other moments in this Gospel. The name “Satan” appears only here and two other places in this Gospel. In Matthew 12:26, we read: “And if Satan drives out Satan, he is divided against himself; how, then, will his kingdom stand?” The language of kingdoms is associated with the devil.

More interesting is the connection at 16:23. Here in the desert, Jesus concludes the interaction with the words, “Get away, Satan!”(4:10). This is almost identical to his line to Peter, “Get behind me, Satan!” (16:23). In the Greek, the difference is small. Only two words are added—“behind me.”

The harsh response to Peter reflects the idea that Peter is conceiving of the Messiah-King in the framework of the imperial model. He is engaged with the possibilities of kingdom as defined by empire. His ambition will be matched by James and John later on, when they seek the seats on the right and left of the Messiah’s throne.

As Matthew and his generation knew so well, the Roman Empire maintained its place in the world by force. Crucifixion, for example, was favored by the Roman authorities for the way it discouraged rebellion. Even those who had little to lose might think again, once they witnessed the cruel humiliation of the crucified.

Of course, Lent, beginning here, ends with the crucifixion. When Jesus rejects the proposal of Satan, he rejects much. That includes the safe haven that the might of the empire offers its citizens. Jesus instead puts his trust in God. “The Lord, your God, shall you worship and him alone shall you serve.”

Lent is a time to clarify our allegiances and review the state of our faith. Biblical faith is trust in God, as we will see even more clearly next week.

For reflection: We do not easily trust. Do we trust in God?

Parable of the Two Sons