David called to be king of all 12 tribes

Going up to Jerusalem rejoicing

Firstborn of creation; firstborn from the dead

The king on the cross 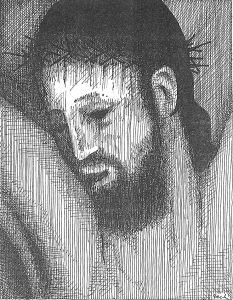 This is the last Sunday of the ordinary church year. It is designated “The Solemnity of Our Lord Jesus Christ, King of the Universe.” In the Bible, “Christ” (or “Messiah”) already designates the “king,” so there is some redundancy in the title. But what does it mean? The readings of the day, like witnesses in court, bring different testimonies to that claim. Let us look what each has to say about it.

The reading from 2 Samuel 5:1-3 is from the history of David. He has already become king of the tribe of Judah (2 Sam 2:4), but now the chiefs of the different tribes come to invite him to be king of all the tribes. As such, he would be the first king of all Israel. David agrees, and they anoint him king of Israel. The titles “Christ” (Greek) and “Messiah” (Hebrew) literally mean “anointed one.” David is the anointed one. Eventually, the kingdom would be ended, by the Babylonians. But the various messianic passages in the Old Testament, such as the promise to David (2 Sam 7:11-16), would be now read as applying to the king to come who would restore the kingship to Israel. The New Testament says that Jesus of Nazareth is that person.

The response psalm is one of the psalms of ascent (Psalms 120-134), short psalms recited during processions in (or toward) the temple on major feasts, like Tabernacles. This one pictures Jerusalem as the home of the “thrones of the house of David.” David captured Jerusalem, which until his time had remained in Canaanite hands. He made it his own city, apart from any of the tribes. This psalm recognizes that.

The reading from Colossians 1:12-20 is an ancient hymn. If Paul wrote Colossians, which some scholars doubt, but not by any means all, then this would be one of the oldest passages in the New Testament. Paul died in 64 or 67 B.C., before any of the other New Testament authors wrote. (Mark’s Gospel was next, written during the Great Revolt of 66-70 A.D., which ended with the destruction of Jerusalem and its temple.) The hymn moves through two major assertions — that the Son is the firstborn of all creation (like the prologue of John 1:1-18) and that he is the firstborn from the dead. Apparently, the Jews that believed in resurrection saw it as a new creation, comprised of believers who now lived the life the creator originally intended. Paul saw Jesus as the first to be raised, the first of the new creation. The picture in the hymn shows him as the one through whom all things take place. While it doesn’t say he is king, the exalted position is certainly one of kingship of creation, and new creation.

The Gospel reading from Luke 23:35-43 is a familiar one. It is the account of the dying Jesus on the cross and his interaction with the good thief. The setting is one of humilation, as those present mock Jesus. The issue is Jesus’ right to be called Christ, or king of the Jews. One of the thieves joins in the mockery, but the other — the good thief — does not. His plea: “Jesus, remember me when you come into your kingdom.”

But we should not neglect the irony here, for Jesus is being executed by the Romans, who have conquered Judah. If Jesus is king, it is not a kingship as everyone imagines it should be. This is not the Old Testament image of the Messiah. And yet the Gospel says that is exactly what Jesus is.

For reflection: Christ’s kingship differs from what we expect.

Note: Although The Witness is being published in the hard copy edition every other week, this column appears weekly in the online version.

‘Into His Likeness,’ Chapter 5: Not perfect, but chosen