Your speech is telling

O death, where is your victory?

Can the blind lead the blind? 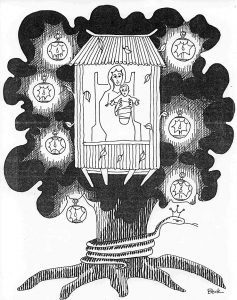 The readings for this Sunday favor teachings over events, aphorisms rather than stories. The passage from Sirach uses vivid images to bring attention to the damage that one’s speech can bring about. When a sieve is shaken, the husks that were formerly obscured in the mix now become visible. When a potter puts her creation in the kiln, she finds out if there were some flaws in the modeling of the clay. When autumn comes, the fruit tree discloses if it has been given care, or not. So it is with what comes out of our mouths in our speech.

If Sirach is concerned with speech, Luke shows Jesus thinking about our influence on one another in a broader perspective. The bodily image moves from the mouth to the eye. Can the blind lead the blind? Will not both fall into the pit?

And with this, the Gospel launches into the famous example of the persistent critic’s eye trouble: “Why do you notice the splinter in your brother’s eye, but do not perceive the wooden beam in your own?” But it doesn’t stop there, as the passage imagines the conversation between the critic and the criticized. Finally, the verdict: “You hypocrite! Remove the wooden beam from your eye first; then you will see clearly to remove the splinter in your brother’s eye.”

We notice here an example of Jesus’ style of preaching and teaching. He loved vivid, but (for us) rather extreme, metaphors. One of the difficulty in any literalistic reading of the Gospel texts is doing justice to this style. It was not uncommon among the culture of his time. But we like things more specific and accurate. We are not comfortable with the Bible, and Jesus, using poetic license. But we ourselves often think in images. And vivid images help to make biblical sayings memorable, and that is the case today.

We do not really think that the person he is correcting actually has a wooden beam in his eye. We understand that is an absurd exaggeration, used to indicate the ridiculousness of the pattern of behavior it is dramatizing. But we should remember that when we come to other rather outlandish exaggerations, rather than try to work out a rationale which makes the saying more reasonable. A camel cannot get through the eye of a needle. It is impossible, and that is the point. The largest animal known to them and the smallest aperture available make a good contrast.

The Gospel moves on to the image of the tree bearing fruit. Again, the image is elaborated, comparing brambles to grape vines. And figs do not grow on thorn bushes. Good trees bear good fruit; bad trees do not.

And with this, we return to the theme, and imagery, of the reading from Sirach, “… for from the fullness of the heart the mouth speaks.” The fruit of the human spirit is revealed in our speech. And furthermore, the response psalm reinforces the image field for today, with another instance of the fruitful tree.

And with that, we come to an interesting conundrum. The readings today insist on authentic speech, honest language. No dissembling; no misleading statements. And yet, in making that point, they employ outlandish metaphors, which we struggle to take literally. Clearly, neither Sirach nor Jesus perceiver any contradiction here. They apparently see the imagery they use as teaching a truth that cannot be reached as well otherwise. Biblical language is often poetry, and yet it is also speaking the truth.

And, of course, we should be speaking the truth, whatever style we favor in our manner of speaking.

For reflection: Poetic images in Scripture speak to us in different ways, and you have your own examples, I’m sure.

The Manna in the Desert