THE SOLEMNITY OF THE MOST HOLY BODY AND BLOOD OF CHRIST

Mediator of a new covenant 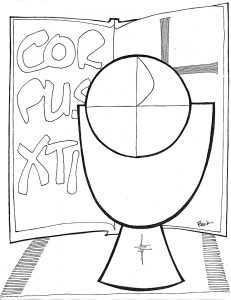 The readings for today’s feast, generally known as Corpus Christi, have a different emphasis in each yearly cycle. Last year the image that dominated was the body of Christ. This year it is the blood. Next year it is more elusive, but a good claim could be made for the theme of remembrance.

The image of blood makes its first appearance in the reading from Exodus. The occasion is the confirmation of the covenant on Sinai. Moses has finished his negotiations with the Lord, and he brings the result before the people. The terms of the covenant are the Ten Commandments (Ex 20) and the Exodus law code (Ex 21-23). The people are to decide if they accept them or not. They vote in favor — “We will do everything that the Lord has told us.” And so it is time to seal the agreement. For this, they turn to the blood ritual of sacrifice.

The late and great Roland de Vaux, the French Dominican, led the excavation team that first worked on the Dead Sea Scrolls. He was director of the Ecole Biblique in Jerusalem, which gave us the Jerusalem Bible. And he wrote a classic volume called “Ancient Israel,” in which he discussed the religious institutions of Israel. In it, he made the case that sacrifice as the Israelites understood it was not a matter of requiring a death to pay back a jealous God. It did not focus on death, but on life. The reason behind his thinking was that the concrete imagination of ancient Israel located the life of the living creature in its blood. Sacrifice loosed the life of the sacrificial victim, to the benefit of the worshipers.

This manner of thinking can be seen in the ceremony of the Sinai covenant. Sprinkling blood first on the altar and then on the people symbolized in a concrete way that they now shared a common life. Having done that, Moses says, “This is the blood of the covenant that the Lord has made with you in accordance with all these words of his.”

The letter to the Hebrews is known for developing the theme of sacrifice more than any other book in the New Testament. This also is the book that identifies Jesus as a high priest, offering the sacrifice of which he is also the victim. We see that clearly in today’s passage. The author is making the point that the temple sacrifices attempted to do something that they never succeeded in achieving — healing the rift between the human community and God. This was only accomplished in the death of Jesus, which Hebrews de-scribes as a sacrifice. Again we can see the emphasis on life, seen in language of “cleansing” the flesh.

There are three parts in Mark’s account of the Last Supper. We omit the second, about Judas’ betrayal. We retain the ne-go-tiations for securing a room and table to celebrate the meal (Mark 14:12-16). Mark describes it in language that echoes almost exactly the preparations for the entry into Jerusalem, in Mark 11:11-7. The supper account (Mark 14:22-26) concerns the bread and the cup, commonly known as “the words of institution.” These appear in three other places in the New Testament. In their Gospels, Matthew and Luke have similar accounts (Matt 26:26-29; Luke 22:15-20), although Luke complicates things by introducing a second cup. The fourth instance is in Paul’s first letter to the Corinthians, 11:23-26.

In Mark’s account, Jesus says, “This is my blood of the covenant, which will be shed for many.” We recognize that a reference is being made to the Exodus event of our first reading. We also discover the words “for many” in the restored liturgy comes from here.

For reflection: How do you interpret “sacrifice”?

Making a Difference: Moral necessity of voting with well-formed conscience this election