“my allotted portion and my cup”

“one sacrifice for sins”

“of that day or hour, no one knows” 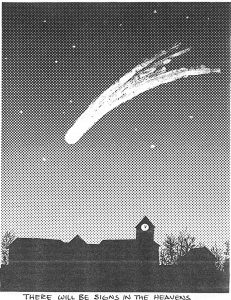 From the final weeks of the ordinary church year to the first Sunday of Advent, the liturgy turns toward apocalyptic and the end times. So it is this week, with the first reading from the book of Daniel and the Gospel from the 13th chapter of Mark.

Apocalyptic is a genre of writing that is often misunderstood. First of all, it is a literature of consolation, despite what it may seem, with its language and judgment and desolation. It was not written for the powers that are placed under judgment in its dramas. The intended audience was the community of the faithful who found themselves in an apparently hopeless situation. Marginalized and without obvious avenues toward success in this world, with apocalyptic it can look forward to victory, as unlikely as it would seem at the time. In this sense, it is meant as a consolation for those outside the cultural avenues of worldly success.

Consequently, for its readers, its main message was not about the future so much as about the present. In his book “Jesus, a Jewish Galilean,” Sean Freyne writes, “In the book of Daniel God’s universal lordship has both cosmic and political reference. It provides reassurance the while earthly kings such as Darius may rule temporarily, the universal rule of Yahweh will prevail” (138). The book of Daniel pictures the trials under the conditions of exile, with Darius as emperor.

But it was written much later, during the difficult times of Antiochus, the emperor of Syria who was attempting to transform Jerusalem and its temple to Hellenist norms. The times were viewed as an ultimate threat to Judaism, and it gave rise to the Maccabean revolt, as well as the book of Daniel. Today’s passage from Daniel 12:1-3 pictures the salvation of the elect in those final times of trouble. It is a word of assurance as well as resistance to the emperor.

The 13th chapter of Mark is written in the apocalyptic style as well. It is Jesus’ farewell to his disciples. Mark signals this by identifying Jesus’ audience as Peter, Andrew, James and John. These four haven’t been together in one scene since their call, in Mark 1:16-20. Then it was their introduction to Jesus; now it is goodbye.

Here too we are in a time of crisis. The writing echoes reports of the destruction of Jerusalem in 70 A.D. Once more we see apocalyptic directed toward the ordeal being endured by the readers. Sean Freyne again: The apocalyptic imagination drew on biblical ideals “to challenge the existing unjust social structures, not by the traditional means of a militant re­sistance but by a new and creative interpretation of the kingdom of God.”

However, vigilance is required. The Gospel passage continues on beyond what we have today — “Be watchful! Be alert! You do not know when the time will come. … Watch, therefore; you do not know when the lord of the house is coming, whether in the evening, or at midnight, or at cockcrow, or in the morning. May he not come suddenly and find you sleeping. What I say to you, I say to all: ‘Watch!’” (13:33, 35-37).

It is difficult not to think of the warning to Peter, “‘Amen, I say to you, this very night before the cock crows twice you will deny me three times.’ But he vehemently replied, ‘Even though I should have to die with you, I will not deny you.’ And they all spoke similarly” (14:30).

And then, the struggle in the garden, when Jesus tells the apostles, “Watch and pray that you may not undergo the test. The spirit is willing but the flesh is weak” (14:38).

For reflection: How might apocalyptic be consoling for some today?

Parable of the prodigal son

What would a church ‘on the move’ look like?