Our God is generous in forgiving

The Lord is near to all who call

Life is Christ and death is gain

The parable of the vineyard laborers 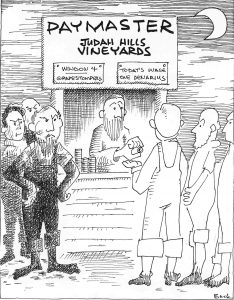 The parable for today is known as a problem parable. Consequently, it is one that almost everyone remembers. We find it difficult to accept the parable’s approval of a landowner who pays those who worked an hour the same wage as those who worked all day. When the landowner defends himself by pointing to his generosity to those last hired, we tend to wonder why he wasn’t also generous to those who were hired first and increase their hourly pay to match that of the latecomers.

We like the fact that he was generous to the last, but we do not like how he treats the first. And of course the last word is, “Thus, the last will be first, and the first will be last.” So the parable itself makes a point of emphasizing the disparity.

People were hired all day, at various hours—dawn, nine o’clock, noon, three o’clock and five o’clock. That is spelled out very deliberately. But when the time comes to compensate the workers, the parable focuses its attention to the first and the last only, dramatizing the contrast. In addition, the following lesson of the parable focuses on this contrast. It makes sure those hired last receive their payment first, so that those hired first can see what is happening and protest. It highlights the response of those first hired and reports the landowner’s unrelenting response. And it concludes noting that the last shall be first and the first last.

In hiring workers, the landowner promises “what is just” (Matt 20:4). So the parable itself emphasizes the issue of justice. We are not missing the point when we find ourselves disturbed. But what is justice in this situation?

Catholic social teaching typically distinguishes between distributive justice and commutative justice. The first concerns the just allocation of goods in a society. The second concerns dealing fairly in contracts with individual and private groups. The parable seems to be intentionally pitting them against one another. On the one side, we have the equal distribution of wages, apart from the hours worked. On the other side, the owner reminds the first hired that they had contracted for the wage they received.

But it is also worth backing up a bit, to look at the events of the day. The owner ventures into the marketplace looking for workers. Why? Do we assume that his motivation comes from not having enough workers for his vineyard? It doesn’t say that. It might just as well be that he is concerned about those without work and wants to give them a chance to earn a paycheck.

In line with this, we might note that the amount involved is a denarius, usually described as equivalent to a typical day’s wage. Our translation simply states “the usual daily wage.” In other words, the owner is paying a living wage, which also is a justice concern. If the landowner is looking to help workers find employment, he might also be concerned that they be paid according to their needs. The “daily wage” would suggest that.

So is this parable then about the resentment of those who are concerned about others being at the receiving end of generosity, instead of themselves? Or is it about the conflicting claims of justice, the contractual and the distributive?

Or maybe it is about something else entirely—the classic debate between justice and mercy. The parable suggests that it is indirectly talking about the action of a merciful God among his people, with the resentful reaction aroused in some of them. So maybe the different readings aren’t that different after all.

For reflection: What do you find the most difficult part of this parable? Why?

Who is the Lord’s counselor?