The Spirit poured out

You are all baptized into Christ

You are the Christ of God 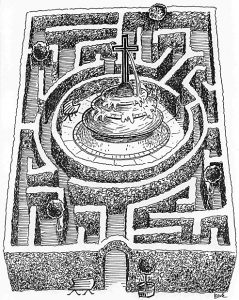 The last chapters of Zechariah were written after the exile. Israel had returned to the land, but it was becoming quite clear that they would not be reviving the kingship of the David house, since their imperial overlords were quite clear about remaining in control. The later writings turned toward the distant and ideal future, when God would finally make good on his promises to Israel.

In those days, it says, God will pour out on the David house and the city of Jerusalem, as from a fountain, a spirit of grace and petition. That is the main message. It looks to the time of Israel’s vindication. It suggests that the kingship will be restored. Whether the writer intended it or not, surely the passage came to be understood as referring to the coming Messiah, who would restore the kingship to Israel. This would not be a reference to Jesus of Nazareth, but rather to the role of Messiah, which the New Testament says that Jesus filled.

Along with this, the passage says they shall look on the one they have pierced, and there will be great mourning. Adding to the mystery, the text adds: “On that day the mourning in Jerusalem shall be as great as the mourning of Hadadrimmon in the plain of Megiddo.” King Josiah, the last good king, famously died on the battlefield of Megiddo, trying to prevent the Pharaoh Necho from joining the Assyrians in their struggle against upstart Babylon. His death was the beginning of the long slide that led to the Babylonian exile.

Megiddo is the great plain south of Gali­lee, famous for its battles. Its title, “field of Megiddo” is Har-Megiddon in Hebrew, the symbolic battlefield for the apocalyptic “Armageddon.” Like Zechariah, Revela­tion looks to the great reckoning in the final days.

A more famous use of this passage is John 19:37, a scriptural gloss on John’s account of the pierced side of Jesus on the cross. John sees Jesus as fulfilling the role sketched out in the prophetic passage.

But who is this Hadad-rimmon? The name combines two Syrian gods. They were apparently equated, and in turn were seen as equivalent of the agricultural god Tammuz, known for dying and returning to life. The elaborate mourning of Tammuz was an annual ritual occurring on the summer solstice, the start of summer heat and killing drought. It is perhaps a coincidence that the solstice occurs on June 20, 2016—that is, tomorrow. The death of the enigmatic “pierced one” is said to bring about mourning so severe it rivals the excesses of the pagan ritual. Altogether, Zechariah’s imagery offers an important, if mysterious, prefiguring of the Messiah.

The liturgy picks up the fountain imagery in the psalm and the reading from Galatians. Paul talks about the Christian as baptized into Christ. The passage contains the well-known verse, Galatians 3:28, “There is neither Jew nor Greek, there is neither slave nor free person, there is not male and female; for you are all one in Christ Jesus.” Paul strongly opposes the Christian “Judaizers” who follow him around, insisting that Christians are first of all Jews, and should be circumcised. The specter of circumcision is behind his statement of radical egalitarianism. In his list of “neithers,” circumcision applies to the first item in each pair—Jews, males, and slavery (see Galatians 5:1-2).

There is so much to say about the passage from Luke, but it won’t be today. Suffice to notice that Luke adds the word “daily” to the call to take up one’s cross. Clearly he is thinking of it as a form of Christian lifestyle and devotion, bringing into Christian orbit the apocalyptic promises of Zechariah.

For reflection: Why present the Spirit as a fountain?

The Alpha and the Omega