A virgin shall be with child

The Lord is king of glory

Son of God through the Resurrection 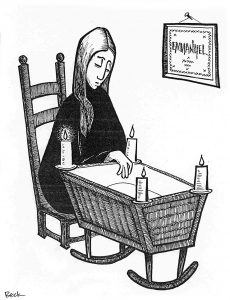 More than any of the other Gospels, Matthew’s emphasizes the royal heritage of Jesus as Messiah. Tracing it through Joseph, seen in the first 17 verses with its genealogy, Jesus is counted as “son of David.”

The previous Sundays of Advent this year have prepared us for this with passages from Isaiah. We heard about the tree of Jesse, the family tree of David, reduced to a stump. At the same time, the root is promised a new shoot, one that will return the royal family in the future. Matthew makes the case that Jesus of Nazareth is that shoot, that new branch of the royal family tree.

Today that royal claim is made by way of another Isaian passage. In Isaiah 7:10-14 we have a promise made to the king who happened to be the current son of David in Isaiah’s time. King Ahaz took the throne in difficult times, as his neighbors, the kings of the northern kingdom of Israel, and the king of Damascus, were trying to form a coalition of local nation states who would oppose the rise of Assyria in the east. It was looming as a serious threat, and they decided to take action.

They invited the king of Jerusalem to join them, but Josiah, the king at the time, refused. Then he died, and his young son, Ahaz took the throne. Just in time to have the armies of his two neighbors at the gate, attempting to force the compliance of Jerusalem, or be given a new king to their liking. Ahaz, like his father, was inclined to refuse them. But it was a tight bind, and so his inclination was to appeal to the Assyrian emperor for assistance against these two armies. Isaiah tried to dissuade the young king, but to no avail, as it turned out. Unfortunately, Assyria answered his request, and that was the beginning of the end, first for Israel, and then Judea.

In the present instance, a desperate Isaiah pushes the king: Ask for a sign, any sign. The king, in what looks on the surface like piety, says no. He will not test the Lord his God. What he really means is that he has already made up his mind to ask for Assyrian help. So Isaiah gives him a sign anyway. That sign is the first reading for today.

The passage about a “young woman” (as it originally read in Hebrew) giving birth is a threat that this king will be replaced by another. Or so many scholars think. The title: “Emmanuel”—“God with us”—seems to have been one of the royal titles of the next king, Hezekiah. But later, after the kingdom itself was reduced to nothing (remember the “stump of Jesse”), this verse was read as promising a Messiah, born of a “virgin,” as the Greek Bible translated the word. Matthew picks up on this, for he knows that Jesus is the one indicated by Isaiah.

Joseph’s dream sets out the program for the child to be born, a program that is realized in Matthew’s story of Jesus. He will save “his people” from their sins.

Who are “these people”? While we see a reference to the human family, Matthew, a Jewish Christian writing to Jewish Christians, probably was thinking of Israelites, and their lost kingdom. Matthew shows Jesus insisting he has come for the “lost sheep of the house of Israel” (10:5-6; 15:24).

However, the end of the Gospel makes a turn toward the wider world, as the risen Christ commissions the disciples, “Go, therefore, and make disciples of all nations, baptizing them in the name of the Father, and of the Son and of the holy Spirit” (28:19).

For reflection: How do we think of the “Messiah”? How is he king?

A message from heaven: God is the only way to peace