As a father has compassion

You are the temple of God

Turn the other cheek 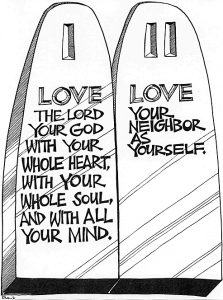 The Gospel for today, widely cited among peace groups, contains what is likely the most cited references to non­violence in the New Testament. Two commentaries on Scripture concern the law of Talion and the injunction to love one’s neighbor.

The first concerns retaliation, the literal meaning of Talion. In Lev 24:19-20 (also Deut 19:21), we find: “Anyone who inflicts a permanent injury on his or her neighbor shall receive the same in return: fracture for fracture, eye for eye, tooth for tooth.” The concern here seems to be harnessing the escalation of cycles of violence.

Escalation of stakes is a common exper­i­ence in life. Here is one example: My young­er brother, who at different times in his life was a football linebacker, a bouncer and a military policeman, used to joke that his toughest job was as a high school lunchroom moderator. He tells of one instance in which two friends (who else?) got into an argument, one calling the other a name. This resulted in retaliation, as food was thrown back. This prompted stabbing with a fork. At this point, my brother reached the scene, and a reconciliation of sorts prevailed.

Recognizing this pattern, the law of Talion tries to establish that no more than the harm done shall be returned in response. But our experience is that this is only partly satisfying. We want to up the ante a bit, which then results in raising it once again in response.

But Jesus’ recommendation goes beyond this. He flips the second move. Rather than returning the damage done, forego the impulse entirely. Instead of a retaliating response, invite another blow. Could he be using humor to make a point? The four examples that follow are witty, but also serious.

The second Scripture quote is probably Lev 19:18, which also happens to be our first reading for today. This is confirmed by the second allusion. When Jesus concludes with the words, “So be perfect, just as your heavenly Father is perfect,” we have an allusion to the first part of the Leviticus passage: “Be holy, for I, the LORD, your God, am holy.”

The quote from Leviticus doesn’t mention anything about hating one’s enemies. Nowhere in the Bible is this advice given. However, the passage about loving one’s neighbor generated an impressive debate down through the ages. Some held that only fellow Israelites were neighbors. However, the same chapter from Leviticus goes on to include the stranger in the land. “When an alien resides with you in your land, do not mistreat such a one” (Lev 19:33). Later debate questioned whether this meant only foreigners who converted, or everyone who now lived in the land, convert or not.

In Jesus’ day, the Essene community took a strong stance against including the stranger. The Pharisees on the other hand, disagreed among themselves.

In Luke’s Gospel, the expert in the law raised this same issue, which Jesus answered by the parable of the Good Samaritan (Luke 10:29). Clearly, Jesus was more inclusive in his interpretation.

When Jesus concludes this set with the call to be perfect as your Heavenly Father is, it would seem that for Matthew, God is likewise nonviolent. But this too has raised considerable discussion, particularly in regard to the portrait of God in other parts of this Gospel. It is Matthew who gives us the version of the parables that end with the evildoers being cast into the outer darkness where there is weeping and gnashing of teeth. This doesn’t sound nonviolent.

Others would say that this is Matthew’s way of assuring those who follow the way of nonviolence that this doesn’t mean that justice is being neglected. However, the tension remains.

For reflection: Why do you think retaliation escalates?

Salt of the earth, light to the world

Let the heavens be glad and earth rejoice