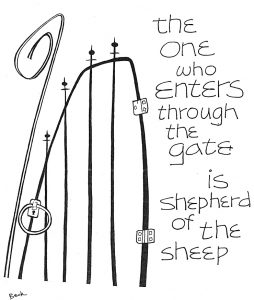 Good Shepherd Sunday frequently brings warm thoughts of shelter and being cared for. Here it is Psalm 23—“The Lord is my shepherd, I shall not want”—that sets the tone. However, we notice that this year the Gospel does not mention the Good Shepherd. Next year, we will get further into the chap­ter and hear about the shepherd. For now, it has to do with being admitted through the gate. Jesus is the true gate.

But before we get to that proclamation, we find ourselves hearing a lot about false entry, thieves and robbers who do not enter through the gate. And to appreciate this part of the reading, it is helpful to see where this chapter fits, in the story of Jesus as John tells it.

In today’s passage we are nearing the end of a section that begins way back at the beginning of chapter seven of John. There we find the feast of Tabernacles is approaching. Jesus delays in going to Jerusalem for the feast. But eventually he goes there, and the events that are recounted in John 7:1—10:21 all take place during Tabernacles week. The first two of these chapters, 7-8, are set in the Temple. The rest are in the city, outside the Temple.

The Tabernacles chapters in John are intense. Opposition to his work and claims is mounting against Jesus, and now matters break into strident debate. John 7-8 contain some of the strongest language in the Gospel, including mutual charges between Jesus and his opponents regarding who might be in league with the devil. At the end of chapter 8, they try to stone him, but he manages to escape.

In chapter 9, we have the story of the Man Born Blind, which we encountered on the Fourth Sunday of Lent. In the larger picture, this too is part of the growing tension. It begins innocently enough, but it escalates the tension between Jesus and his opponents, which reach an especially brittle level by the end of chapter 9.

And with that we come to chapter 10, and today’s reading about the sheep gate. While it offers words of consolation to the sheep, it also delivers some sharp in­vective against the false shepherds, the thieves and robbers.

In the Bible, as in the ancient world in general, shepherd imagery was used to represent leadership, especially kingship. This is the point of Psalm 23. Ezekiel 34 is an entire chapter devoted to criticism of the kings as unworthy shepherds, presenting God as the only true shepherd. Also, Moses significantly spent time as a shepherd, as did King David. In a non-biblical example, in his famous law code, Hammurabi, Babylonian king of the first dynasty, in 1792 BC to 1750 BC, styles himself a shepherd of the people.

In other words, today’s passage from John 10 is not only a reassurance of proper care from one who will shortly call him­self the “Good Shepherd” (see 10:11, the next verse). It also mounts a fierce criticism of the leadership of the time, as it was exercised by the Jewish authorities. This is not lost on them, and before the chapter is out, they will attempt once again to stone him. And when this doesn’t achieve the results that they want, they will turn to Rome for assistance, which we see in the next chapter, John 11:49-53. Unwittingly, in doing so, they illustrate Jesus’ point about their failed leadership.

The Bible is frequently disappointed in the human beings placed in positions of authority, and this has generated a lot of biblical comment about God being the true shepherd—including Psalm 23. And today we see Jesus as the authentic representative of that divine authority.

For reflection: What would be a modern equivalent of the caring shepherd?

Blasting holes through the buffered self

Third Sunday of Lent: standing in the middle