A vine from Egypt

The peace of God, and the God of peace

Parable of the vineyard tenants 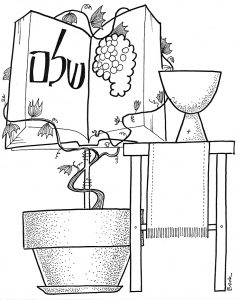 In past weeks, we have been following Matthew’s story of Jesus all the way up to Jerusalem. But now we skip over the accounts of the entry and Temple cleansing, since they are featured during the special seasons of the liturgical cycle, and we join Jesus in the debates in the Temple, during his final week.

Today’s set of Scripture readings offers a couple of entry points into their meaning. One is through imagery. The other is by way of the relationship of the Old Testament to the Gospel. In fact, that relationship is contained in the image of the vineyard. The vine is a traditional figure for Israel, along with the fig tree (Matt 21:18-21; Jer 8:13) and the olive (Rom 11:17; Jer 11:16).

We might begin with Psalm 80, today’s response psalm. The selection for today occurs part way in. It speaks of Israel as a vine from Egypt, transplanted by God, who cleared out the nations to make space for it.

Think for a moment about the implications of the vineyard image. It speaks of culture as well as cultivation. It represents abun­dance, but also requires care and supervision. While it is a gift of nature, it is an object of intense nurturing as well. Today’s psalm passage is part of a larger prayer asking for God to restore his people. The vineyard has been allowed to run down into ruin. A new beginning is needed.

Isaiah builds on this tradition with his vineyard song. Perhaps it was delivered during the grape harvest, during the Feast of Booths, or Sukkoth, in late September or early October. The harvesters spent a week in the fields, guarding the grapes, and gathering them. The “booths” or “tabernacles” were huts constructed of branches and palms, in which they dwelt during the duration.

Like the rest of Israel’s nature festivals, the feast also had a historical meaning. It celebrated the dedication of Solomon’s Temple, the Tabernacle. Isaiah trades on both the nature feast and the historical meaning when he describes his friend’s vine­yard, now descending into ruin. The vineyard is Judah, and the friend is Yahweh God.

Jesus’ parable of the vineyard tenants builds on this. It clearly has Isaiah’s song in mind. Many of Jesus’ parables have roots in the Jewish story tradition, and many play on Old Testament passages. In this case, Matthew shows Jesus comparing the vineyard to the history of mismanagement chronicled by the Bible. It is a story of cycles of guilt and repentance, and Jesus is tapping into that story for his day, drawing on Isaiah’s precedent. Jesus has just arrived in Jerusalem, a destination for the last half of the Gospel story. And he wastes no time in delivering his message. The leaders are compromised and failing their role as guardians of the faith and the people.

The parable ends with a quote about the cornerstone: The stone that the builders rejected has become the cornerstone. That passage is from Psalm 118, which is identified in the Jerusalem Bible as a Tabernacles psalm, typically sung as they entered the Temple precincts. In the original version, Israel was the cornerstone, long ignored by the nations, but soon to come into its own as God’s chosen.

Jesus changes the meaning, capping off the parable about the rejected son with a surprise ending. Recognizing themselves as the target of the story, the chief priests and elders determine to arrest him, but the time is not yet ripe.

Notably, Psalm 118 was just previously featured in Matthew’s account, as the Ho­sanna hymn recited as Jesus entered the city to cleanse the Temple (Matt 21:9). It is all part of the same drama.

For reflection: You might explore aspects of the vine image to represent God’s people.

The Ascension of the Lord

Who does justice will live