The call of the prophet Isaiah

You have heard the words of my mouth

The call of the apostle Paul

The call of the apostle Peter 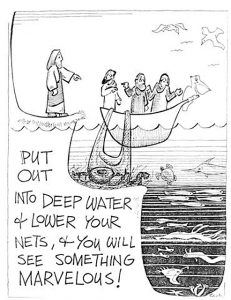 The call to discipleship is a natural theme at the beginning of the church year. The lectionary follows the arc of the Gospel story, which itself begins with calling disciples.

Last week featured the call of Jeremiah. This week it is Isaiah. Set against the back­drop of the heavenly temple, the passage has given us the Sanctus prayer with which we begin the Eucharistic Prayer. Isaiah is as much an eager responder as Jeremiah was not. An interesting detail is the burning charcoal ember taken from the heavenly altar to purify his “unclean lips.” An obvious metaphor, this gesture doesn’t scar him permanently, as one might expect, but rather actually en­­ables this imperfect human to utter divine messages.

Today’s main example of a call to disci­pleship is of course that of Peter in the Gospel reading. Luke treats the story of Peter’s call differently from the others. Matthew follows Mark’s account closely. In this version, Peter is among the foursome called from their fishing enterprise at the lakeside. Shortly afterward, they invite Jesus to Peter’s house, where his mother-in-law is down with a fever (Mark 1:16-20; 29-31), whom he heals.

Luke, however, has already told of the cure of Peter’s mother-in-law (Luke 4:38-39) by the time we come to this story. It would seem that Jesus and Peter were already acquainted when the incident on the lake occurs. Thus Luke sets it apart, giving it special attention.

The story is well known. Jesus is preaching at the lakeshore to a large crowd. He persuades the fishermen there, who are washing their nets, to take him out on the lake where he can speak to the crowd from that vantage point. Note that preaching from the boat projects an image of being a “fisher” of human beings.

Among them is Peter, whom Jesus asks to lower the nets for a catch. Peter, after some protesting, does so. Upon yielding a massive catch of fish, Peter falls at the feet of Jesus and pleads, “Depart from me, Lord, for I am a sinful man.” For “astonishment at the catch of fish they had made seized him and all those with him.”

The story of Peter’s call is one of a repentant “sinner.” As such it introduces a Lukan theme. In this Gospel we have a number of examples, not found elsewhere, of persons repenting. The woman who washed Jesus’ feet with her tears (Luke 7), the Prodigal Son (Luke 15), the tax-collector Zacchaeus (Luke 19) and the Good Thief (Luke 23) are all examples of Lukan sinners. Each of these stories speaks of repentance for a pattern of life that can be identified as sinful. The woman was a public sinner; the Prodigal Son wasted his inheritance. The tax-collector Zacchaeus no doubt exploited his position as the others of his trade did, earning them also the reputation of being public sinners. And the Good Thief was, well, a thief.

But what about Peter? One has a sense that his repentance is deeper, more basic. He is a “sinner” in the sense of being prey to the imperfections of the human condition — something dramatized by his sudden encounter with transcendence. He is small and petty, embarrassed before the divine power of his “Lord.”

The reading from 1 Corinthians also mentions a call, as Paul says of his relationship to Christ, “Last of all, as to one abnormally born, he appeared to me.” He is speaking of his encounter on the road to Damascus. Here he lists himself among those who were witnessing to the Resurrection. But one could say it also counts as his call to apostleship.

For reflection: It may not be a coincidence that Pope Francis, like Peter, also described himself as a sinner.

No leading to yes!

A light has shone