Pope Francis said to a crowd in 2015: “In speaking about a serious, honest person, the most beautiful thing that can be said is: ‘he or she is a worker’…Work — I repeat, in its many forms — is proper to the human person. It expresses the dignity of being created in the image of God. Thus, it is said that work is sacred.” The words from Pope Francis offer us an invitation to talk about work, the worker, and the wage they earn on this Labor Day weekend.

The topic of wages in particular is a perennial issue in policy discussions at local and national levels, and especially between workers and employers. Rather than specifying an exact dollar amount here, let’s review what principles should go into determining what every worker should be guaranteed for a wage, regardless of the job they do, according to our faith.

As stated earlier by Pope Francis, all work is sacred. Whether you are a janitor or doctor, according to our faith, both activities are equal in dignity and both are sacred occupations. This is because work is dignified, not by the specific task itself, but by the fact that it is done by human persons utilizing the gifts from God as stewards of his creation. The Second Vatican Council explains this relationship between human persons and work in this way: “Indeed, we hold that through labor offered to God man is associated with the redemptive work of Jesus Christ, who conferred an eminent dignity on labor when at Nazareth he worked with his own hands. From this there follows for every man the duty of working faithfully and also the right to work.” (Gaudium et Spes, 67) Just as we have a right to food, water, clothing, healthcare, education, we also have a right to work because work connects us to our Creator and Savior.

Unfortunately, the conversation too often looks at work solely from the utility of the work done or how much profit the work can raise rather than taking into consideration the primary reason for work – the person doing it. And so we see social media memes or cable news celebrities denigrating certain workers by calling them “burger flippers” and going to great lengths to argue why they don’t deserve a living wage because their work is “less than” the work of others. As Catholics, we reject such arguments because all work is sacred as are the lives of the people doing the work.

With the right to work come other rights that flow from it. When those rights are violated poverty results: “(the poor) appear as a result of the violation of the dignity of human work: either because the opportunities for human work are limited as a result of the scourge of unemployment, or because a low value is put on work and the rights that flow from it, especially the right to a just wage and to the personal security of the worker and his or her family.” (Laborem Exercens, 8)

As Catholics we are called to focus on the dignity of the persons doing the work, the people they support with their wages, and the common good of society. When it comes to minimum wages the church tells us “remuneration for labor is to be such that man may be furnished the means to cultivate worthily his own material, social, cultural, and spiritual life and that of his dependents.” (Gaudium et Spes, 67) And “an element that must be appreciated and safeguarded is that of a family wage, a wage sufficient to maintain a family and allow it to live decently. Such a wage must also allow for savings that will permit the acquisition of property as a guarantee of freedom.” (Compendium on Social Doctrine, 250)

The requirements to uphold the Catholic faith in wages then guides us to see that all wages, regardless of the specific job being done must provide for the basic necessities of life: clothing, shelter, food, healthcare as well as providing for the social, cultural and spiritual life of the family. It must be sufficient to be able to save and acquire property. It must also allow workers to “enjoy sufficient rest and leisure to cultivate their familial, cultural, social and religious life.” (Gaudium et spes, 67)

Wages must also be sufficient that a family can live off of one income. Pope Pius the XI declared it “an intolerable abuse, and to be abolished at all cost” that both parents should be forced to work because the wages of one parent is not enough to support the family. (Quadragesimo Anno, 71)

The ability to accomplish these principles requires a great effort on the part of all workers, employers, citizens, and the appropriate government authority. Different things must be taken into consideration: Cost of living for a particular area (housing, food, healthcare, clothing), transportation, cost of school, projected cost of retirement, enough left over to acquire a house/property and spend for leisure as well as “the productivity of each, the state of the business and the common good.” (Catholic Catechism, 2434) This means that the minimum wage is to be enough for a life of human flourishing but ought not be excessive for the sole purpose of satisfying a materialistic desire for things.

Affording all of these things may not solely come in the form of a paycheck and may include sufficient social programs; “various forms of important social provisions help to bring it about, for example, family subsidies and other contributions for dependent family members, and also remuneration for the domestic work done in the home by one of the parents.” (Compendium, 250) The responsibility of citizens, the society as a whole, employers and workers is to work with charity and justice toward one another in order to assure these principles for all families are met because the worker, the work, and the family work supports, is sacred.

Schmidt is Respect Life/Social Justice director for the archdiocese.

St. Joseph’s example as an antidote to the crisis of masculinity 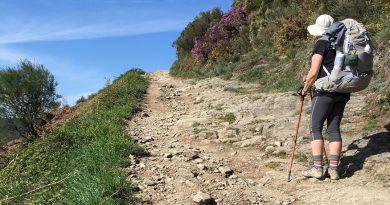 Following footsteps of an apostle on ‘The Way’