SOLEMNITY OF THE ASCENSION OF THE LORD

Seated at the Right Hand

A sanctuary not made by hands 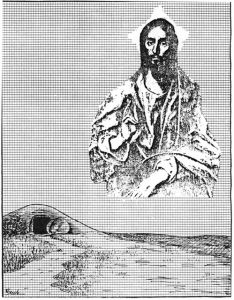 The Ascension appears as an event twice in the New Testament, both due to Luke, and both among today’s Scripture readings. The only other gospel writer that suggests this is John, who implies it as happening between Jesus’ Easter day farewell to Mary Magdalene in the Garden and his appearance among the gathering of disciples that evening.

Today’s reading gives us the conclusion of Luke’s Gospel, which in this case ends with the disciples remaining in Jerusalem. Jesus’ Ascension is mentioned in the last four verses. That minimal treatment is expanded in Acts, where we learn about the forty days intervening since Easter. Forty days is a general number for indicating a good length of time. It is not intended to be precise.

Here we see something very characteristic of Luke. He likes to have his events do double duty. In this case, he is giving a theological mystery a calendar schedule. Writing late enough to feel a need to account for the end of the resurrection appearances, he identifies the Ascension as the moment they ended. His treatment also reinforces the proper sequence—first, Resurrection; then, Ascension; third, the descent of the Spirit. He always makes the calendar work for him—here the sequence is theological as well as temporal.

The first of these, from the letter to the Ephesians, pictures Jesus being raised to headship over all things, including his body, which is the church. This passage differs from the image of the body of Christ in I Corinthians 12:1-31 and Romans 12:4-8. There, when Paul refers to Christ, he intends the community. Here, Christ is the head of the body, rather than the body itself. In Ephesians, then, a distance, however slight, emerges between Christ and his body, the church.

The image in Ephesians is similar to that in the famous hymn at the beginning of Colossians. But here too there is a difference. In Colossians, Christ is the head of the church (1:18) and firstborn from the dead, as he is the firstborn of all creation (1:15). The emphasis is on first things. Christ is head by virtue of being first. But in Ephesians, the emphasis is on final things. Christ is raised to the right hand, where he participates in the fullness of God, and the church in the fullness of Christ. Christ, who represents humanity for us, has completed his mission, returned to the Father, and is now recognized for that.

The differences between these accounts most likely trace to different problems Paul is facing. In Ephesians this would seem to be certain strands of Gnostic thought that would place certain angels above Christ in a spiritual hierarchy. For the Gnostics, matter was corrupting, and pure spirits were inherently superior. But here Paul insists on the full truth of incarnation. It is bodily, or nothing.

The alternative text is from Hebrews, which makes the general case that Christ’s mission accomplished what the repeated sacrifices of the temple liturgy tried to do, and failed—remit sin. The passage for today is in two parts. The first part, 9:24-28, has as its topic the sacrifice of Christ, presented as superior to the temple sacrifices. The sanctuary is the true sanctuary, not one made by hands. The second part, 10:19-23, constitutes an appeal to the believer to have confidence in what has been done, holding fast to our confession of faith.

For reflection: What has been your thinking about celebrating this feast?

Sent out by Jesus

A wisdom not of this age