Wife Returned After Having Fine Funeral.

The headline of a 483-word story in the March 15, 1904, edition of The New York Times bore a sly nod to Tom Sawyer. A man named Ignacio Valente was charging the city with a funeral bill he had been wrongfully issued, according to the Times.

It had all started in the kitchen: “Valente is an Italian, and about six weeks ago he quarreled with his wife, Angelico, over the way she cooked macaroni. As a result of the quarrel the wife left Valente’s home, declaring she would rather die than return.”

Indeed, she did not return, and Valente eventually reported her missing to the police, who said the body of a woman matching his description was at the morgue.

Valente identified the clothing of the dead woman but not the body.

The story goes on: “‘This woman was better looking than my wife,’ Valente says he declared. ‘Death beautifies them all,’ the Morgue man is said to have replied.”

Eventually Valente was persuaded, and he went on to have the body dressed in his wife’s wedding dress, a request she had once expressed. He attended her funeral and footed the bills.

Notice of the event was published in Italian papers, which came to the attention of “the real Mrs. Valente,” who hurried home. Her husband arrived later and found her “rummaging about for her wedding dress.”

The story proceeds: “‘Why, I buried you in it three days ago,’ Valente, in his surprise, replied. Real trouble followed this, and, when Valente had satisfied himself it was his real wife who stood before him, and that he had buried the wrong woman, he could only restore peace by promising his wife another wedding dress just like the one in which the strange woman had been buried.”

According to the Times, Valente was now demanding that the city pay for his funeral expenses as well as $110 for a new wedding dress and $40 “for wages lost.” For all its humor, the story also has a bygone feel, harkening back to an era when the Times felt like a small-town paper to New Yorkers. In 1904, Ignacio and Angelico’s plight had landed among “all the news that’s fit to print.”

The debate over what qualifies as “news that’s fit to print” has picked up fervor in our Misinformation Age, when we tap through fake news, funny news and failing news with a single slide of the thumb. Editorials, advertorials and objective reporting.

And yet, there is another definition for Christians: the good news. Easter once felt like news. For those who believe, it was – and remains – the biggest news of all time.

To truly be Easter people, as we are called, means to not only be people of hope but people of words, with a story burning in our hearts. We’d ask with wide eyes: Have you heard the good news?

Keeping our hearts open to the cry of the poor 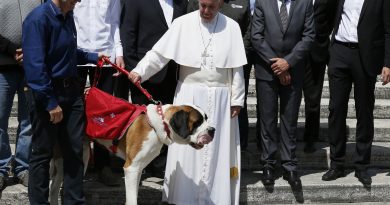