You judge with clemency

Lord, you are good and forgiving

The Spirt himself intercedes

The weeds, the mustard seed, the yeast 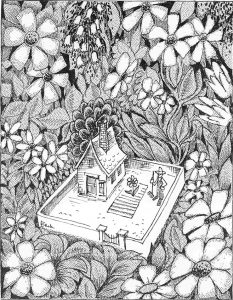 The parables for this Sunday might be considered to fall into two sets. On the one hand, we have the parable of the weeds and wheat, with the alle­gorical interpretation of that parable. On the other hand, and between these, we find the two parables of the mustard seed and the yeast. And then there is that announcement following the yeast parable concerning Jesus’ use of parables, which includes the proclamation, “I will announce what has lain hidden from the foundation of the world.”

The weeds and wheat parable ends with a dire announcement that appears more than once in Matthew’s parables. After the sorting out, the evildoers will be thrown “into the fiery furnace, where there will be wailing and grinding of teeth.” This invites a closer look, which takes us back to the beginning of the Gospel.

In Matthew, John the Baptist and Jesus of Nazareth begin on the same page, an­nounc­ing, “Repent, for the kingdom of heaven is at hand” (3:2; 4:17). But after this, the two move in different directions. The Baptist foresees a severe judgment, occurring soon. “Even now the ax is lying at the root of the trees; every tree therefore that does not bear good fruit is cut down and thrown into the fire” (3:10). But as his mission unfolds, Jesus introduces at least two changes.

First, unlike John, he moves toward the theme of healing, which prompts that later discussion between him and John (Matt 11:2-6): Are you the one who is to come or should we look for another? Tell John what you hear and see—“the blind receive their sight, the lame walk, the lepers are cleansed, the deaf hear, the dead are raised, and the poor have good news brought to them.”

A second difference is in the timing. John is expecting an immediate judgment. But Jesus moves it back, to the end of the age, as we see in these parables. This delay is also a concern of John and prompts the question he sent to Jesus. Where is the axe? Why isn’t something dire happening to the evildoers?

But there is a third thing as well, particularly noticeable in this parable. The outraged are not to take the matter in their own hands. The servants are instructed not to pull up the weeds, but to let them grow together until harvest (the end of the age), and then the weeds and the wheat can be sorted into separate bundles, for different destinations.

In other words, the judgment belongs to God, not to you, dear disciples. Thus those eager for the hand of justice to display itself, even eager to do the work themselves, are told to wait upon God. Like the farmer in the drawing today, much is going on outside one’s narrow plot of ground.

But that does not mean that little is happening, that the work of the disciple has no effect. For that we have the other set of parables, the mustard seed and the yeast. These two, often seen as a matched pair of sorts, have similar messages. Both mustard and yeast are ambiguous. The mustard is a weed, in most farming cultures. And yeast consistently represents corruption in the biblical tradition. The act of clearing the house of leaven for the Passover feast participates in this symbolism. So there’s irony in Jesus’ choice of examples.

For reflection: What are some of the things we learn about the kingdom in these parables?

‘All the news that’s fit to print’

‘A motherless child’: reflecting on adoption and abortion