The new Exodus as return from exile

The Lord brought back the captives

For his sake I have accepted the loss 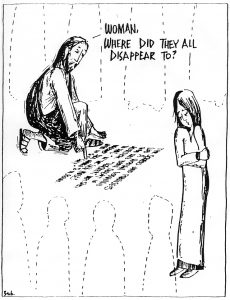 The first reading is one of my favorite Old Testament passages. It illus­trates the benefits of a close reading, looking at voices, images and grammar. So often the Old Testament is a closed book to us, and a reading strategy is useful.

There are two speakers. Imagine an after-­dinner speaker on a special occasion. First, we have the introduction, which praises the speaker and gives some background. Then, the invited speaker follows with a speech. Here the introduction (43:16-17) is the prophet; the speaker (43:18-21) is the Lord God.

The introduction cites the past history of God’s role in the release of Israel from bondage in Egypt. It cites the crossing of the Red Sea, with the defeat of the pursuing forces. The speech itself says that is all in the past. Something new is happening. The new thing is Israel’s release from Babylonian exile. The prophet’s image for that is that of an extended greenbelt, a linear oasis, across the Saharan desert, more direct than following the fertile crescent. That would take them north and then back south again.

The Judeans had been defeated and taken into captivity, ending the time of the kingdom. They did not expect to get a second chance in the land, but the Persian emperor Cyrus the Great gave them exactly that opportunity. The passage styles this as a second Exodus. It is like that from Egypt, centuries earlier. But also different. Notice how the imagery is reversed, as a way of saying it is similar, but different. The flight from Egypt was a dry path through the sea. The route back from Babylon is a watery path through the arid desert.

The Gospel account of the woman accused of adultery is well known. It seems to have had an independent career, before it found a home in John’s Gospel. It isn’t included in the earliest manuscripts of the Gospel. While it has affinities with Luke, it also fits well here. The attempt at stoning is not unknown in John. Twice in this Gospel there are attempts to stone Jesus (8:59; 10:31).

The story illustrates the nonviolence of Jesus. Most of us, more persuaded by the effectiveness of forceful measures than non­violent ones, will grant it as something one might do on one’s own behalf. But it is not to be risked in the case of protecting others. Which is to say, nonviolence is not really thought to be realistic as a means of resolving disputes. Or so we usually think. There is actually a great deal of evidence that it is very effective as a means of conflict resolution, though it has its risks. As, of course, do violent methods. In the Gospel story, Jesus does exactly that — he defends another person who is vulnerable with nonviolent means.

Thomas Merton, the great spirituality author and Trappist monk, spoke of two kinds of nonviolent methods. One kind involved coercion, for example, boycotts. This was often very effective, but less than ideal. A more perfect way is to invite the opponent through conversion. This is the way of engaging in conflict without abandoning love. Needless to say, it is not easy, since we enjoy revenge and winning as much as ending conflict.

Jesus’ opponents here are righteous in their accusations of the poor woman. His response is to invite them into self-reflection — a seemingly dangerous choice, for the woman as well as himself. Then he pauses, writing on the ground, waiting. This is the tense part. They recognize that he is inviting them to a choice. And they do not disappoint.