I will raise up a just shoot

To you I lift up my soul

May you abound in love

Signs in the sun and moon and stars 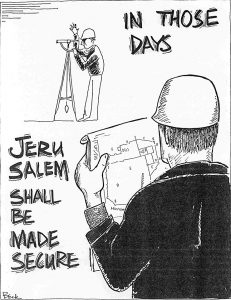 Today we enter the year of Luke’s Gospel. But we begin with Jeremiah. The reading from Jeremiah has a history. The first version of this passage is Jeremiah 23:5-6. There it completes a series of devastating judgments on the kings Jeremiah has known. He fails to name the last, but instead plays on his name — Zedekiah, which means “Yahweh our justice.” His sly message is that someday Israel will have a king who deserves that name. Zedekiah, by the way, was the last king before the fall and destruction of Jerusalem, in 587 B.C.

Later on, after the Babylonian exile, someone improvised on this passage and produced today’s text, applying it to the new situation. The captives had returned, and expectations were high.

The changes the writer introduced include the elimination from the promised hope of any reference to Israel, the northern kingdom, for that had passed into history.

Also, he introduces the line, “I will raise up for David a just shoot.” The “shoot of David” was a king in the Davidic dynasty, that had ruled from the beginning until the exile. But in this case the reference implies that the kingship itself will be restored. In Jeremiah’s original writing, the kingship was firmly in place, and he was simply looking forward to another king, this time a just one. But when today’s passage was written, based on Jeremiah’s text, Judah had become a province of Persia, and no longer an independent kingdom. The writer longs to see the kingdom restored.

However, that was not to happen. The kingdom was not restored; the David kings never returned to prominence. And yet the passage remained on the books. It was now read in a new way, as applying to the distant future. In those days, a true king, the Messiah, would come to restore the David kingship and the glory of Judah, the primacy of Jerusalem. The New Testament, of course, informs us that this anticipated Messiah is Jesus of Nazareth; a timely message for beginning Advent. However, as the Gospel unfolds, we will discover that this Messiah is not in the militant, conquering mode that the prophecies seem to have anticipated. Changes will occur. But that is the story of the coming year.

In the Gospel reading for today we continue the apocalyptic theme that began a few weeks ago. Again the theme is vigilance; also, reassurance. For when the dire happenings appear, we are told not to join the terrified, but to “stand erect and raise your heads, because your redemption is at hand.” The signs are terrifying for the unjust, but welcome to the beleaguered who have suffered at their hands. Once again we see that apocalyptic is intended to be consolation to the marginalized, but not for those who abuse them.

Meanwhile, the second reading from 1 Thessalonians fits the focus of this day. This letter addressed the Thessalonian community’s concern about the second coming of Christ. Since they believed it was imminent, they were afraid that some of their members who had died since Paul visited might now miss the final gathering. After allaying their concerns, Paul closes with these words we have today.

“Advent” means coming and the liturgical season features at least three advents. The coming in the last days, this Sunday’s message, is the first we hear about. For the next two Sundays we will hear about the coming of Jesus at his baptism, the beginning of his public life. In the fourth Sunday, we will focus on the imminent coming celebrated at Christmas — the birth of Jesus.

For reflection: Hope and Advent come together in this time. And perhaps today’s readings show that.

Can Cubs fans teach Christians something about discipleship?

What would a church ‘on the move’ look like?