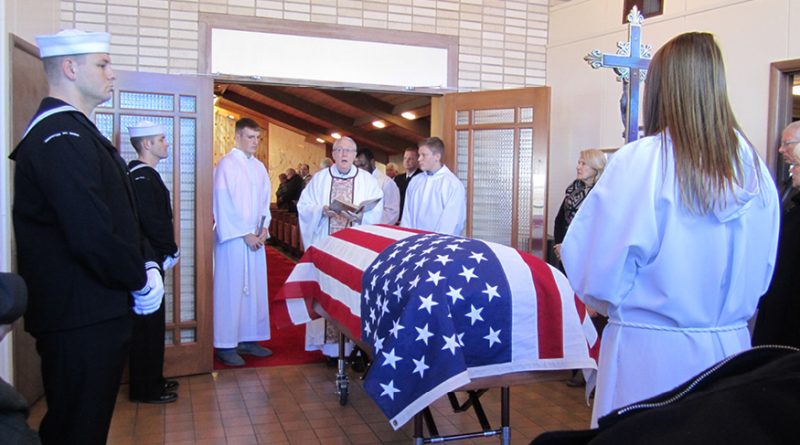 His ship was hit by a torpedo during the 1941 attack

TRAER — Nearly 77 years after his death, the relatives of William “Bill” Kvidera, a U.S. Navy sailor killed at Pearl Harbor during WWII, and residents of the Tama County area in which he was born and raised, recently had the opportunity to welcome their hero home.

A funeral Mass was held for Kvidera at St. Paul Parish in Traer on Nov. 16. Father Jon Seda concelebrated the Mass, along with Fathers Michael Hutchison and Paul Lippstock and Msgr. John Hemann. Representatives of the Navy were present to perform full military honors. Following the funeral, Kvidera was buried in the parish cemetery, where his parents and three of his brothers also rest.

Kvidera, who grew up on a farm between Toledo and Traer, enlisted in the U.S. Navy in 1940. He was assigned to the battleship the USS Oklahoma as a carpenter’s mate third class when Japanese aircraft attacked the ship on the morning of Dec. 7, 1941. The attack resulted in the deaths of more than 400 members of the ship’s crew, including Kvidera. He was 22 years old.

Though the remains of those who served aboard the Oklahoma were found in recovery efforts following the attack, most were not able to be identified and were eventually buried as “unknowns” at the National Memorial Cemetery of the Pacific in Honolulu. In recent years, the U.S. Department of Defense exhumed those remains in an attempt to identify them using DNA testing not earlier available.

Several members of Kvidera’s family provided DNA samples that helped make an identification of his remains possible. One of those family members was John Kvidera, William’s 91-year-old brother and only surviving sibling.

“I couldn’t believe it could happen and was happy the Navy was able to bring Bill home,” John told The Witness in a recent interview.

John, who lives in Traer and is a longtime member of St. Paul Parish, said that the Catholic faith had been an important aspect of his brother William’s life.

Prior to his time in the Navy, William was a member of Holy Trinity Parish in Tama County’s Otter Creek Township, where he worshipped with his parents and five younger brothers.

“He was quite religious, and in a letter to his mom, he asked her to pray the rosary for him instead of a Christmas gift,” John recalled. “He helped build an altar for Mass at the U.S. Naval Training Station in Great Lakes, Illinois.”

John and his wife, Pat, attended William’s funeral, as did many other members of the family who traveled to Traer in order to welcome William home. “It’s happy it’s happening …” John said of the funeral, in the days leading up to the event. “I wish my brothers could be here,” he added, “but a lot of their children and grandchildren will be here.”

William’s niece Kelli Staut traveled home from out of state to attend the ­funeral. “It was an amazing day and such a special tribute to my uncle,” she reflected.

Staut said she appreciated the way in which the fire and police departments of Tama escorted her uncle’s remains and the Kvidera family halfway from the funeral home to the church, and then the departments of Traer escorted them the remaining way. It was “such an honor,” she said.

Members of the Kvidera family have expressed gratitude to the U.S. Navy for the efforts made to identify William’s remains and bring them home so that the funeral and burial could take place.

Their appreciation is shared by Mike Fink, the commander of Traer’s American Legion Kubik-Finch Post No. 142. “As veterans, we’re really all pleased to see this happening, that our government is making an effort to identify remains and bringing them home,” Fink said “That’s one of the things the veterans’ groups work for.”

Kennan Seda, a member of the local Sons of the American Legion and also a St. Paul parishioner, spent the afternoon before Kvidera’s funeral lining the path connecting the church to the cemetery with American flags.

Seda said that area residents have continued to keep the memory of William Kvidera alive through the years. The Tama-­Toledo VFW Post No. 6607 is named after him. He has also been remembered at Masses in Traer, including at a Mass held two years ago on the 75th anniversary of the Pearl Harbor attack. “We haven’t forgotten him,” Seda said.

As Kvidera’s remains came home for his funeral and burial, Seda said it was “a testimony that you never know what God’s plans are going to be.”

“Back in 1941, ‘42, I don’t think the family ever thought he’d be buried in Iowa. It just didn’t look like it would ever happen,” Seda reflected. “We can’t always see what God has in store.” 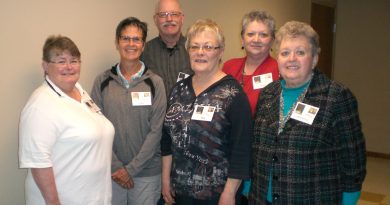 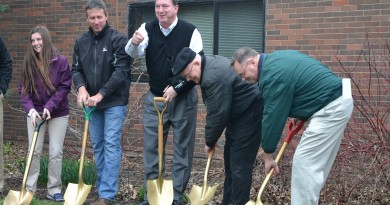