When the just cry out 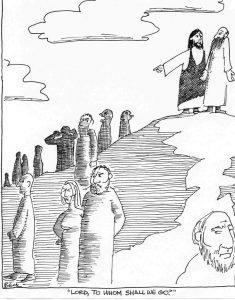 John has his own way of telling the story of Jesus. This applies to his account of the disciples as well. In John’s handling of the story, the disciples appear for two major moments of instruction. One is at the supper, where we encounter a long discourse (John 14-17). The other is here, in Chapter 6, with the Bread of Life Discourse. In addition to these two, the disciples are featured at the beginning, where they are called (John 1:19-51), and at the end, in the Resurrection stories (20:1–21:23). In between, changes occur.

In all the Gospels we find a crisis moment in the center of the story. The disciples discover the greater implications of following Jesus and have to decide whether or not to continue following him. In the other Gospels, this watershed moment occurs at the end of the Galilee ministry of Jesus, at which time Jesus speaks of shifting his attention toward Jerusalem, where he will suffer and die. Peter, speaking for the disciples, disagrees and argues with Jesus (Matt 16:21-23; Mark 8:31-33). In John’s account, however, the crisis appears here at the conclusion of the Bread of Life Discourse.

In Chapter 1, the disciples had signed on to the movement, but they were not so clear about the full meaning of following Jesus. Now they know much more. As James McPolin, SJ, notes in his commentary, “That a man from Nazareth should claim that he is a life-giving revealer sent from God is ‘hard’ to take … and only faith can overcome the ‘offence’ or stumbling-block of the Incarnation.” But again, Peter, speaking for the Twelve, asks, “To whom shall we go? You have the words of everlasting life.”

We might think that the “offense” they are enduring is a difficulty in believing in the real presence in the Eucharist. But we should remember that John is writing before all the church councils and theological developments that benefit us in our moment in history. He is doing something else.

For one thing, John does not report the baptism of Jesus, nor does he mention the bread and cup at the Lord’s Supper. Instead, as McPolin also states, “John’s center of attention is never the sacraments themselves or the cultic life of the community. Rather his interest centers on the mission and self-revelation of Jesus on earth.” That is, he is sensitive to the sacramental dimensions of Jesus’ life and ministry. Sacraments in action, as it were.

A word about the second reading. This is the notorious passage about wives being subject to their husbands. The liturgy has chosen to provide us with an alternative option. Nevertheless, here are three thoughts on Ephesians 5:21-32.

First, Paul’s letters typically have two parts, doctrinal teaching at the beginning and moral applications at the end. This part of the letter is applying Paul’s teaching to Roman society. It is valuable to us as an example of application rather than as a doctrinal principle.

Secondly, as just mentioned concerning John’s Gospel, times have changed, and Paul’s society is not like our own. This is seen in that statement on wives and husbands that is part of a threefold set that includes fathers and sons, and slaves and masters. Clearly a society that features slavery as an accepted tradition is of a different time. We can also expect marriage and parenthood to be seen differently.

Thirdly, Ephesians was probably written by a disciple of Paul who reworked Colossians for other uses. Today’s passage seems to be an example of that. It develops Colossians 3:18-19 into a distinctly different reflection on Christ and the church, as a comparison between the two passages will show. Check it out.

For reflection: What might McPolin mean by Jesus’ life as “sacramental”?