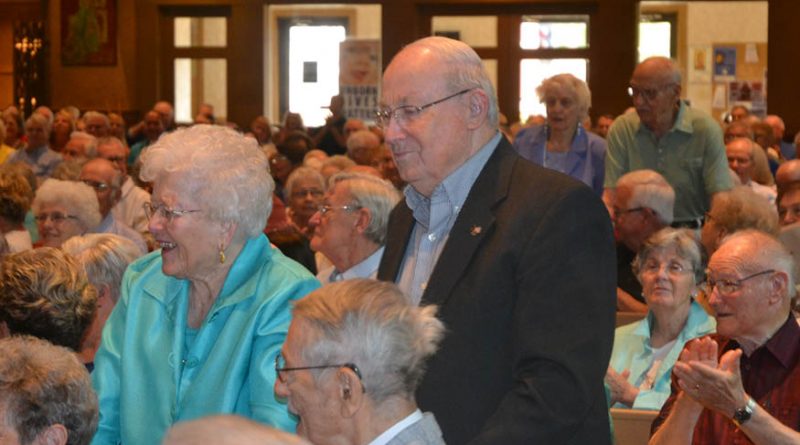 CEDAR RAPIDS — The day Ken and Ginger Erger got married 71-years ago, the church where the sacrament took place was undergoing construction. The chaos around them didn’t distract the young couple as they looked into each other’s eyes while reciting their vows.

“It was all torn to pieces,” recalled Ken Erger. “There was scaffolding all over. They were just starting to renovate the place. It didn’t bother us. We’re still married.”

The Ergers, members of St. Jude Parish in Cedar Rapids, were among dozens of couples that filled St. Patrick Church in Cedar Rapids to capacity Aug. 12 for the last in a series of Masses around the Archdiocese of Dubuque held to celebrate those who have been married 50 years of more. The Ergers were one of only three couples there that had made it to the 70-plus milestone. After the homily, they again had the opportunity to look into each other’s eyes, smiling, to renew their commitment.

Ken Erger met Ginger while he was in the Navy.

“I was home on leave one time, and it was just that Navy uniform,” speculated the husband on why he was able to win over his wife.

“I saw the man behind the uniform,” Ginger remarked, gently chiding her mate.

After recounting their individual love stories, many of the couples in attendance, including the Ergers, pointed to their faith as a key reason why their marriages endured the test of time.

“Believe in the Lord,” said Ken Erger. “He’s been good to us. We’ve been so blessed.”

In July and August, Archbishop Michael Jackels concelebrated six Masses for couples married 50 or more years with local pastors. Liturgies were held at the Cathedral of St. Raphael in Dubuque (July 28), St. Henry in Marshalltown (July 29), St. Francis de Sales in Ossian (Aug. 4), St. Mary in Waverly (Aug. 5), St. Joseph Church, Epiphany Parish in Mason City (Aug. 11) and St. Patrick in Cedar Rapids (Aug. 12). About 1,000 couples participated overall, according to Matt Selby, director of the Office of Marriage and Family Life of the Archdiocese of Dubuque.

“We have been pleasantly surprised with the response,” said Selby, whose office sponsors the marriage celebration liturgies semiannually. “I think it’s a great witness for young couples and engaged couples, especially in our society, that it is possible to have marriages that last 50 or more years.”

Following the renewal of commitment, the congregation prayed for the couples. The archbishop then blessed them. They held up their wedding rings, which the archbishop re-blessed.

While preaching, Archbishop Jackels drew laughs from the crowd with an opening joke before reflecting seriously on the lessons Adam and Eve could teach everyone.

“Remember being taught how Adam and Eve had no parents because they were created directly by God, which is why when we get to heaven we will know immediately which one is Adam and which one is Eve,” said the archbishop. “They will be the only two there without belly buttons.”

The archbishop reminded the congregation that God created Adam and Eve to be partners and helpmates, “each serving, even sacrificing for the sake of the other.” He also recognized that no marriage, including Adam and Eve’s, is perfect, despite marriage’s important role in God’s design.

“Because not even Adam and Eve could live up to that ideal,” he said. “They sinned against God. They offended each other. They apologized to each other, forgave each other; they even repented of their sin against God. With God’s help, Adam and Eve kept trying, which is another essential element of this model for holy matrimony.”

The archbishop closed by commending the couples for their commitment to their vocation and urged them to “keep trying.”

After the Mass in Cedar Rapids and at other locations, couples were invited to a reception. Mary and Richard Meyer, who met while attending high school in Holy Cross, traveled to the event from Dubuque to mark their 50 years as husband and wife.

“Don’t give up so easily,” reflected Mary when asked for advice for young people thinking of marriage. “That’s the main thing. We work things out together.”

Patience and persistence were also important to Bernard and Margaret Monaghan, a couple from Manchester that attended the Mass at the cathedral in Dubuque to celebrate 59 years of marriage. They met while Bernard was in the Army three weeks before he left for Korea. They wrote letters to each other while he served abroad. After getting married, they farmed and raised nine children.

“We worked together,” said Margaret.

Cover photo: Ken & Ginger Erger stand up with other couples who have been married 70 years or more at a Mass Aug. 12 at St. Patrick Parish in Cedar Rapids.  (Photo by Dan Russo/The Witness)

Week 27: Liturgy of the Eucharist: Preface