The vine from Egypt you transplanted

The peace that surpasses understanding

Parable of the Vineyard Tenants 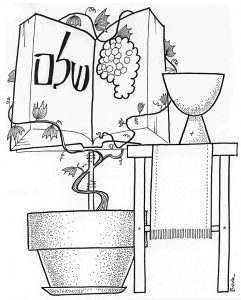 Isaiah’s vineyard song may have been composed for the Festival of Booths, or Sukkoth. This was a weeklong celebration of the grape harvest, and involved parties along with the harvesting. The “booths” were temporary shelters in the fields, where the harvesters camped for the duration.

These evoked the exodus of Israelite history, when the people lived in tents. The response psalm shows how the image of the transplanted vine became a part of the popular tradition. It presents Israel under the image of a great vine, planted in the promised land by God. This is part of the meaning behind Isaiah’s account.

Also called the Feast of Ingathering, the celebration became a symbol of the final ingathering of the tribes and nations in the final days. So it had meaning in terms of the harvest, the past, and the future. It was a time of parties and pilgrimages.

But Isaiah’s offering to the vineyard feast quickly turns sour, as he makes it an­other excuse for delivering a baleful prophecy. One imagines that his prophecies of doom got tiresome to many, and so he had to invent new ways of getting them out. Loading an innocent drinking song with a warning is one way to do it.

Nonetheless, it is a vivid and memorable poem, and it too became part of the popular tradition. Jesus spins a lesson off it. We see that in opening of his parable, where it mentions the hedge, the wine press, and the tower, in imitation of the beginning of Isaiah’s song.

The parable builds on the same metaphor. The vine is Israel; the tenant farmers are its leaders. The parable says that their management has been unsuccessful. In this reading, the successive servants sent to them for the produce represent the prophets. The Son, then, is Jesus. Since the parable reflects a post-resurrection perspective, Jesus’ story may have undergone some church development later, to bring it up to date with events.

There is a Bible quote in the parable, where it cites Psalm 118. This also is to the point. The original meaning of the psalm had Israel as the cornerstone, ignored by the other nations, even though it was God’s chosen son (Exod 4:22). But now the psalm is given an update. Now the son is Jesus, and the builders who reject him are the Judean leaders. The Jerusalem Bible labels this psalm as a Tabernacles hymn, recited in procession into the Temple. The Gospels cite it as part of the Triumphal Entry of Jesus into Jerusalem at the beginning of Holy Week. Which occurred in the Gospel shortly before today’s parable.

Vines and wines were a large part of that culture. Archaeologists have discovered that Nazareth was in the middle of a cluster of vineyards and wine production. And the image of the vine is a fertile one. The passage in John 15, concerning the Vine and Branches is a notable example.

And of course, it is has a central sacramental place in our own festival, the Eucharist, where all of these aspects combine to enrich the meaning of the sign.

For reflection: For many these days, the power of the Eucharistic sign is felt in its absence.

This column is coming to a close, along with The Witness that sponsored it. It has been a good run, from 2007. For those who have been using it as Bible Study, I recommend a booklet I put together, available from Amazon or on order from your local bookstore. It might work for you. It is called A Bible Study Program Using the Sunday Lectionary: Taking Your Bible Study Group to the Next Level (Resource Publications, 2014).

A message from heaven: God is the only way to peace

The seventh spiritual work of mercy: ‘pray for the living and the dead’