Sister Edith (Marvin) Halbach grew up on a farm in Stacyville, Iowa. She attended Visitation School for all 12 grades. Her main ministry was as a registered nurse. In Dubuque she worked at Xavier Hospital at various times and in various staff and supervisory positions, as well as St. Francis Home.  Other places of ministry were St. Mary’s Hospital, Emporia, Kansas; and St. John’s Medical Center, Tulsa, Oklahoma. In Eau Claire, Wisconsin, she served as a clinical instructor in nursing.  She was the first parish nurse in Mason City, Iowa.  She now resides at Clare House at Mount St. Francis Center.

Sister Joan (Nathanael) Hosch loved growing up on a farm in her native Cascade, Iowa, and riding her horse in the hills. She was educated at St. Mary’s School, Cascade.  She ministered as teacher and/or principal in the Catholic schools of Pomeroy, Keota, Templeton, Dubuque (Sacred Heart), Luxemburg and Dyersville, Iowa; and in Niles and Hazel Crest, Illinois.  She then cared for the residents at Stonehill Care Center for eight years. In 2000 she fulfilled a longtime dream and opened The Sweet Shoppe at Mount St. Francis, a favorite place for the sisters and staff to visit. She resides at Mount St. Francis.  “Jubilee, to me, is the celebration of my calling to live my life as a member of this religious community,” she said. “Why all this comes from God will always remain a mystery, but I believe in the divine plan. This is where I belong.”

Sister JoAnn (Vernon) Lohrman, a native of Oelwein, Iowa, received her grade and high school education at Sacred Heart School in Oelwein.  She attended Briar Cliff University in Sioux City for a year before entering Mount St. Francis.  A homemaker, she served in the congregation’s missions in Iowa at Rickardsville, Mapleton and New Hampton, and in Dubuque at Mary of the Angels and Loras College. She worked in the laundry at Xavier Hospital for 22 years, then at Mercy Health Center’s laundry for 17 years.  She now resides at Clare House where she is retired.  “The Lord God has brought me to this major milestone in his service and the service of his people. As for the future, with his help I go onward.”

Sister Theresa (Macrina) Rolling was born in Armstrong, Iowa, the fifth of 15 children of Peter and M. Elizabeth Rolling.  She served as elementary teacher in Iowa at St. Mary’s, Waterloo; St. Mary’s, Remsen; Sacred Heart, Dubuque; and St. Donatus/St. Catherine.  Certified as pastoral associate, she ministered in Fort Dodge and Forest City/Lake Mills, Iowa and Kearney/Amerst, Nebraska. With Father Raymond Kirtz, OFM, she directed retreats at Christ the King Retreat Center in Buffalo, Nebraska, the Duluth Diocese, and in nursing homes in Minnesota and Iowa.  She now resides at Clare House.  “I rejoice in celebrating this jubilee as a Franciscan Sister,” she remarked. “I am grateful for God’s love experienced through my Franciscan Sisters, my family, friends, and the people with whom I lived and served. This is a blessed occasion for giving thanks, glory, honor and praise to God, who is ever faithful.”

Sister Marla (Virginia) Smith, daughter of William and Mae Smith, was born on a farm near Webster City, Iowa. After graduating from high school in Stratford, Iowa, and attending the American Institute of Business in Des Moines, she worked as a secretary in the Department of Agriculture in Indianapolis, Indiana. Following this work experience, she attended Iowa State University in Ames and later transferred to Clarke College in Dubuque. After college graduation and a dietetic internship at the Johns Hopkins Hospital in Baltimore, Maryland, she entered the Sisters of St. Francis of Dubuque. Her first ministry assignment was as a dietitian at Xavier Hospital in Dubuque, where she worked for 22 years, taking time off to earn a master’s degree at Iowa State University. She moved to Ames where she worked as a dietitian at Mary Greeley Medical Center and later as a secretary at Iowa State University. Sister is retired and lives at Clare House. “I believe jubilee is a special time for joy and gratitude,” she said.

Sister Mary Arnold Staudt, a native of Stacyville, Iowa, graduated from Visitation Grade School/High School. Her ministry has been in music.  She taught music in grade and high school at St. Mary and Columbus in Waterloo and in Ossian and Remsen. She also helped with liturgy at these parishes. She retired in 2010 from over 30 years of service at Briar Cliff University in Sioux City, where she was assistant professor of music and university organist.  She now resides at Mount St. Francis, where she is organist and does some teaching.  “I have enjoyed teaching music at all levels, living with many other sisters of my community, and getting to know the good people and priests in the communities where I have ministered,” she reflected. “These people and experiences have greatly enriched my life.”

Sister Darleen (Elisa) Chmielewski was born in Minneapolis. Her grade school education was in Blaine and high school in Spring Lake Park. She entered Mount St. Francis in 1959. She taught in Iowa at Holy Ghost in Dubuque, St. Mary’s in Cascade and Gehlen High School in Le Mars. In 1969, Darleen began pastoral work in Chillan, Chile for 10 years. Later she worked with the Better World Retreat Movement in Chile promoting a New Image of the parish. After that she lived and worked with the Kanjobal people in the mountain village of San Miguel Acatan, Guatemala. In 1992, she moved to Napa, California, to be closer to her elderly parents and worked as a chaplain in the hospital and taught English as a second language. Since 2017 she has lived at Clare House in Dubuque.

Sister Julie (Alice) Manternach, one of 10 children of the late Peter and Laura Manternach, grew up on a farm near Cascade, Iowa. She was educated by the Franciscan Sisters throughout her 12 years at St. Mary’s School in Cascade. In 1959 she entered Mount St. Francis and began her Franciscan journey. She earned a BSN degree from what was Marycrest College in Davenport and a MSN degree from The Catholic University of America in Washington, D.C. Her entire Franciscan life of ministry has been in the healthcare field, having served at the former Xavier Hospital and Mercy Medical Center in Dubuque. For more than 42 years she served at St. John Medical Center in Tulsa, Oklahoma. “The rewards of having lived this Franciscan life for 60 years have not been 100-fold but rather, 1,000-fold,” she stated. “I wake up every morning and find myself saying, ‘all this and heaven too!’”

Sister Anne Marie (Ramone) Smith, grew up on a farm in Jackson, Nebraska, the oldest of seven children. She attended Jackson Elementary School and Heelan High School in Sioux City. Her early assignments were teaching junior high and high school in Midlothian, Illinois, in North Washington, Iowa, and Dubuque (Wahlert Catholic High School).  She then served as director of religious education in the parishes of Spillville, Iowa; St. John de Brebeuf in Niles, Illinois; Our Lady of the Valley in Phoenix and Resurrection in Tempe, Arizona. She is currently business manager at Resurrection Parish in Tempe. “My 60th jubilee is a time to reminisce, recall and renew, both my friendships and ministry in the parishes I’ve ministered in over the years,” she reflected. “It is also a time to celebrate with our Franciscan community and recall the heritage that is ours.”

Sister Karla Kloft grew up in Asbury, Iowa. She graduated from Wahlert High School in 1974 and Loras College with a biology degree in 1978. Sister Karla entered the Sisters of St. Francis in August of 1978 and professed final vows on Aug. 1, 1987. She ministered as a pastoral minister at St. Mary’s in Waterloo for six years. In October of 1987 she began her doctorate studies in chiropractic health care and graduated from Palmer College of Chiropractic in February 1991. Sister Karla practiced this healing ministry for 25 years at Knutson Chiropractic in Cedar Falls, Iowa; Windsor Wellness Center and Kloft Chiropractic in Dubuque. In 2016 she retired from her chiropractic practice and presently is working at Mount St. Francis Center as director of transportation services; various maintenance tasks; planting and tending a 1.3 acre garden and her honeybees.  “It is with a grateful heart that I celebrate 40 years in this Franciscan community with all the gifts and graces that it has held and holds,” said Sister Karla. 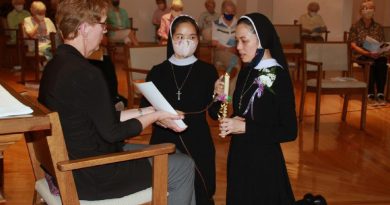