You show the path to life

You were ransomed not by gold

On the road to Emmaus 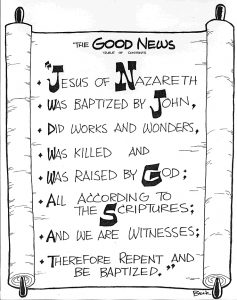 This year the second reading for the Easter season is taken from the first letter of Peter. This reflects the importance of Peter in the early chapters of Acts of the Apostles. It testifies to the early leadership of Peter in the post-Easter community.

In the reading from Acts we have that leadership demonstrated. Following upon the Pentecost event, Peter interprets the event for the onlookers, and delivers the first of a series of speeches that he will deliver in these early chapters. These have a common pattern, which has been called “kerygma,” meaning “proclamation.” These speeches have the form of an early creed, and testify to the faith in its foundational stages. As our creeds do today, this one speaks to belief in a certain set of events in which God is seen acting on our behalf in the story of Jesus.

In its fullest form, it has eight parts: a) Jesus of Nazareth; b) was baptized by John; c) did works and wonders; d) was crucified; e) was raised by God; f) according to the Scriptures; g) of this we are witnesses; h) therefore repent and be baptized.

We will encounter it more than once in the early Sundays of the Easter season. The pattern is not a rigid one, but typically varies in expression, and even what parts are included (though the basics of death, resurrection, and Scripture fulfillment, are always there). Today’s version omits mention of the baptism of John. Also, in one interesting departure, the phrase “according to the Scriptures” is replaced with a specific Scripture reading—Psalm 16. Following the first century convention of seeing the psalms as the composition of king David, Peter portrays him anticipating the resurrection of Jesus.

For good measure, the liturgy has us participate in a recital of the same psalm, as response to the reading from Acts.

The Gospel story about the occurrence on the road to Emmaus is rich, deep, and somewhat long. Much can be said about it, but here we have time for only a few remarks, related to its place among these readings.

First of all, it is notable that Luke’s account reflects the pattern of the liturgy as we have it today. I do not know if this is any­thing more than happenstance, but there it is. We begin with a liturgy of the Word, delivered on the road, with Jesus explaining the Scriptures to them. Following this we have a liturgy of the Eucharist, in the meal at the inn. It is possible that this reflects the ancient pattern as well, with a Scripture reading and reflection, in the synagogue style, followed by the breaking of the bread.

The first part concerning the Word has the pattern of the kerygma speech we already discussed. In the narrative, after the mysterious stranger asks them what has been happening, things move along smoothly, ticking off one item after another in the kerygma format: Jesus the Nazarene, a prophet mighty in word and deed, was sentenced to death and crucified …

But when it comes to the primary witness of this credal formula—the resurrection of Jesus—they halt awkwardly. They are not in a position to act as witnesses to the Resurrection. Instead they cite the experiences of others—the women at the tomb, the brothers who concurred.

After this, the kerygma continues, with Jesus showing how it was “according to the Scriptures.” It is not until later, at the breaking of the bread, that Clopas and his companion truly experience the Resurrec­tion. They are now in a position to be witnesses, and they return to Jerusalem to tell the community. Arriving there, they learn of other appearances, other witnesses.

For reflection: Why should witness testimonies be so prominent in the Easter stories?