I will gather them from the ends of the earth

When the Lord brought back the captives

For he himself is beset with weakness 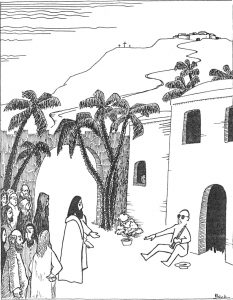 You know that the church year is nearing its end when the Gospel readings come to the blind man of Jericho. This is the last incident before Jesus enters Jerusalem for his final week. Much of that part of the Gospel story will be covered during Holy Week, leaving only a few for now. But, as they say, the end is near.

Here are two things to notice about Bartimaeus, the blind man of Jericho. First of all, his story follows that pattern of all healing stories. Formula patterns are typical of oral accounts, for patterns assist the memory. In healing stories there is a typical sequence — someone with an ailment is introduced, there is an encounter with Jesus, followed by an exchange of words. After this, Jesus performs a healing gesture, one that is then confirmed to have succeeded. Often there is a crowd response, but that is optional.

Different stories work the pattern in different ways. In this story, it almost doesn’t get off the ground, since the disciples nearly succeed in preventing the initial encounter from occurring. In this way, the story highlights the man’s persistence and the disciples’ relative cluelessness about the nature of Jesus’ mission.

A second thing to notice is the place this story comes in the larger narrative. We are just concluding that section of the Gospel that shows Jesus on the road to Jerusalem (Mark 8:31–10:52). Three times Jesus announced the crisis he would encounter once he arrived at the city (8:31; 9:31; 10:33-34). Each time, certain apostles failed to comprehend his meaning. First, Peter; then all Twelve, as they argued over their relative ranking; and finally, James and John, who were requesting seats of honor. Each time, Jesus had to explain that gaining honor was not the meaning of the mission. Rather it was servant discipleship, in the manner of the suffering servant of Yahweh. That was the word last week.

Mark has positioned two blind man stories in crucial places along this road. The first is in Bethsaida, the hometown of Peter and Andrew. That story only Mark tells (8:32-36), and he places it right before Peter’s recognition of Jesus as Messiah, which then leads to Peter’s misunderstanding, in the first announcement of the crisis ahead. In the Bethsaida story, Jesus heals the blind man, who still sees only partially — “I see people looking like trees walking.” So Jesus tries again, and this time the man sees. This is Peter, who only partially understands the meaning of Jesus’ messianic role. He, and the others, need the fuller information of servanthood, which Jesus imparts along the way.

Bartimaeus, the blind man of Jericho, comes at the end of the road, where it contrasts with the story of the ambition of James and John. Now the lesson is that the blind man sees, while the apostles do not. Thus, “he received his sight and followed him on the way.”

The lectionary editors take the lesson in a slightly different direction when they pair the Gospel with a passage from Jeremiah 31:7-9. The topic is that of homecoming, for an exiled and dispersed people. Motifs such as the level road of return and the restored health of the damaged people appear also in the poetry of Second Isaiah, speaking of the return from the Babylonian exile (Isa 40:3-5; 43:19-20). Here, however, the historical event Jeremiah addresses is the earlier loss of the northern kingdom of Israel (“Ephraim”).

Jeremiah speaks of the blind being gathered up along the way. Jesus is on his way to Jerusalem — almost there — and he gathers up a blind man from Jericho, who follows him along the way.

For reflection: What motivates the various actors in the Jericho story?

We all partake of the one loaf

Do we weep or laugh?