Some ask this question simply as a way to try to shut down the voices of people of faith, attempting to push them out of the public square. But there are others, many of whom are faith-filled people themselves, who wonder about this with a genuine concern. Perhaps one of the biggest reasons for this is that in the United States we often use the term “political” to mean the same thing as “partisan.” If we understand political involvement by the church and her members as being partisan, then the criticism is justified. However, as Catholics when we speak of being politically active, we are not supporting a particular party over another; rather, we are promoting virtues, universal principles and human reason that can help create a more just world rather than allowing the laws of the land to be shaped by human vices, relativism and sentimentalism. Such principles include: the intrinsic dignity of the human person, concern for the common good, solidarity with all, subsidiarity, care for God’s creation, the dignity of work and the rights of the worker, promoting peace, the universal destination of goods, among others.

Pope Francis explains our relationship to politics in this way: “An authentic faith … always involves a deep desire to change the world, to transmit values, to leave this earth somehow better than we found it … The earth is our common home and all of us are brothers and sisters. If indeed “the just ordering of society and of the state is a central responsibility of politics,” the church, “cannot and must not remain on the sidelines in the fight for justice.” (Evangelii Gaudium, no. 183)

Human beings are made in the image of a Trinitarian God, a perfect community of persons. This means that our very nature, the very definition of what it means to be human, is to be in communion with one another, to be social, to engage and encounter others with love and justice. Our human nature means we have a responsibility to one another; we have a responsibility to help organize society to serve the dignity of each person as well as the common good.

Politics is how we organize society and one way in which we live our social nature as human beings. As humans we have developed that responsibility into systems of government allowing for specialization of each person in a particular way so that each person does not have to be directly involved in all aspects of human life. I do not grow all of my own food, make my own clothing, mix my own prescription medication, create my own textbooks and so on. Government is part of that division of labor within society as well as a structure that, ideally, ensures that human dignity and the common good are both served and promoted.

We need the laws that govern us because we live in a fallen world and the darkness of sin frequently leads people to do evil against one another even against entire groups of people. Laws, according to Aquinas, not only protect us from injustice and organize society but also helps us grow in virtue. Laws, if they are just, do not limit our freedom, but expand it by helping us all be freed from vice and permit us to do what is good. If we are going to have laws and government, such laws and the means by which we govern society must have values and principles that guide their creation so that society is just.

To that end: “The Catholic community brings important assets to the political dialogue about our nation’s future. We bring a consistent moral framework—drawn from basic human reason that is illuminated by Scripture and the teaching of the Church—for assessing issues, political platforms, and campaigns. We also bring broad experience in serving those in need—educating the young, serving families in crisis, caring for the sick, sheltering the homeless, helping women who face difficult pregnancies, feeding the hungry, welcoming immigrants and refugees, reaching out in global solidarity, and pursuing peace.” (USCCB, Forming Consciences for Faithful Citizenship, no. 12)

Our Christian faith helps us in refining our use of reason by God’s grace that draws us toward the good and away from evil. It also inspires us and instills a passion to look critically at the world around us and see where society may be failing individual persons or the society as a whole. It helps us to ask a very important questions: “How might this harm the dignity of another human being? How might this harm the common good? How will this help humanity to flourish? How does this allow each individual person to become who God intended?”

Our faith in Jesus Christ, by his word and example, anchors us in the conviction to consider the least among us first, to be concerned for every person, to not put our own self-interest above that of others and to ensure justice for all. Faith helps us to perceive the good and choose the good more readily. And it applies centuries of knowledge and experience to our modern day challenges and needs to help us create a more just and loving society.

The church recognizes the proper relationship between church and state but also recognizes that people of faith have not only a responsibility, but a right, to participate in the political process just as any other person who approaches the political world based on his or her own beliefs. We do not cease to be citizens because we are people of faith, nor should our voices be squelched because they come from a place of religious conviction in concert with human reason. And so we engage in the political world, not to impose a theocratic government, but to inform society of the values, virtues, and principles which help create a more just world.

For more information on faithful citizenship and to read the document by the bishops go to dbqarch.org/faithfulcitizenship.

Schmidt is Director of the Office of Respect Life and Social Justice for the archdiocese. This is part two of a three-part series on Faithful Citizenship.

A letter to Philemon

Parable of the Vineyard Tenants 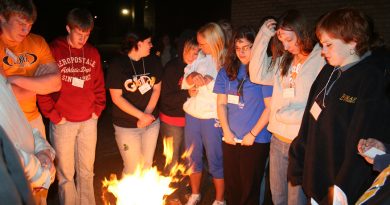 Synod on young people coming in 2018