He has freed my soul from death

Faith without works is dead

You are the Christ! 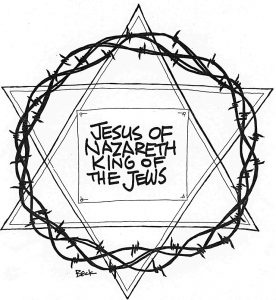 Today’s first reading is the third of the Suffering Servant Songs of Second Isaiah. There are four of them, and they are found at Isa 42:1-4; 49:1-7; 50:4-11 (as here); and 52:13–53:12. Who the servant represents is not a settled question. Whether it is an individual or a collective figure remains unresolved.

It is clear that the prophet applies traits of different famous Israelites, like Moses, Jeremiah, or David, to the servant. For this reason, many think that the prophet has created a composite figure representing faithful Israel, during their time of exile. For Second Isaiah (chapters 40-55 of the book of Isaiah) prophesied during their time in Babylon. In any case, the New Testament applies these poems to Jesus, with the idea that he best exemplifies the true Israelite.

Today’s passage was invoked by the Gospel writers to depict the Passion of Jesus:

“I gave my back to those who beat me,

my cheeks to those who plucked my beard;

my face I did not shield

from buffets and spitting.”

This text is an appropriate partner for today’s Gospel reading. We have reached the halfway point in Mark’s Gospel. The Galilee ministry is coming to an end, and Jesus will now head toward the city of Jerusalem, where he will challenge the leaders there and be executed for his pains. But that is still ahead. For now, there is the matter of concluding one part and starting another.

At the beginning of Mark, which has no infancy narrative, we hear about the baptism by John. In the familiar story, a voice is heard at the baptism, saying, “You are my beloved Son; with you I am well pleased” (Mark 1:11). The voice is combining two famous Old Testament passages — Psalm 2:7 (“You are my Son”) and Isaiah 42:1 “… in whom I am well pleased.”)

The first of these is a Messianic psalm. Which is to say, it speaks to the future figure who will inherit the lost throne of King David, and restore the kingdom. He is the “Anointed One,” for they anointed their kings. Our version of the Hebrew word for this is “Messiah.” The Old Testament was written (mostly) in Hebrew. But the New Testament Greek gives us the word “Christ,” also meaning “Anointed One.” The picture given of the future king in this psalm is one of power and a certain ruthlessness, in the image of the great kings of the day.

But the rest of the biblical allusion given by the voice from heaven is that of the first Servant Song. In effect, the voice is saying that Jesus is the Messiah, but this role is different from the way Psalm 2 pictured. Instead, the Messiah will fill the role of the servant. This is a surprise, and defines the terms of the coming Gospel story.

Which brings us to today’s passage. The Galilee mission is ending, and Jesus asks who they think he is. Peter correctly answers, “You are the Messiah.” However, this is only half of the truth, for Peter wasn’t yet called when the voice came at the baptism of Jesus. He doesn’t know that the program has been revised. His head fills with dreams of power and high places.

So when Jesus immediately announces that he must go to Jerusalem, where he will suffer and die, Peter objects vociferously. They argue. At that point, Jesus revises the terms of the original call by the lake. Now it is not just “Come follow me.” There is new content: “Whoever wishes to come after me must deny himself, take up his cross, and follow me.” We will remember this line when Peter is in the high priest’s courtyard, denying (Mark 14:66-72).

For reflection: How would you describe servant discipleship?