Opening the door to the Gentiles

Known to the children of Adam

A new heaven and a new earth

Love one another, as I have loved you 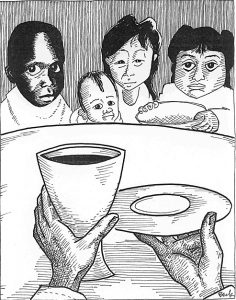 In today’s reading from Acts, the first missionary journey of Paul and Barnabas is coming to a close. This was exploratory, taking the early church in new directions. A primary concern of Luke in writing his Gospel and Acts of the Apostles is the theological warrant for including Gentiles in the story of salvation. There are hints of the universal implications of salvation history already in the Old Testament. In the writings of Second Isaiah (Isa 40-55) we have a call to be a “light for the nations” (Isa 42:6; 49:6).

Second Isaiah, an anonymous prophet whose work is included with those of the original Isaiah, was a member of the “Golah,” the Jewish community that was exiled in Babylon. His role included keeping the faith alive in that community. One way he did this was to give them a purpose for their exile. He told them it was a chance for them to be a witness of the true faith to the larger world. That is how they could be a light to the nations.

Luke makes that a theme for his double work, Luke-Acts. At the beginning, we see Simeon in the temple, greeting the young couple, Mary and Joseph, with their infant child, Jesus. His prayer has come down to us as the “Nunc Dimittis” (“Now, Lord, you may dismiss your servant in peace …”). In it, he paraphrases the words of Second Isaiah: “… for my eyes have seen your salvation, which you prepared in sight of all the peoples, a light for revelation to the Gentiles, and glory for your people Israel” (Luke 2:30-32).

Later, as we saw last week, Paul uses the same language in speaking to the community it Antioch of Pisidia. He is talking about extending the salvation story to those beyond the Jewish community. There, he says, “For so the Lord has commanded us, ‘I have made you a light to the Gentiles, that you may be an instrument of salvation to the ends of the earth’” (Acts 13:47).

And now that mission is drawing to a close. Acts recapitulates the series of stops along the way, but in reverse order, as Paul and Barnabas head back to Antioch in Syria, their home base for the missions. When they arrive there, they gather the church in that city and announce what they have been doing. “And when they arrived, they called the church together and reported what God had done with them and how he had opened the door of faith to the Gentiles” (Acts 13:27). Here Luke is telling us that this mission is a turning point in early church history.

Among today’s New Testament scholars there is a growing contingent of Jewish interpreters. They are not Christian, but their contributions add a dimension to what we have understood about the New Testament message. One of them, Paula Fredriksen, has pointed out that Paul’s decision not to circumcise Gentile converts may derive from his understanding of the final gathering of the faithful in the end times. The prophets promised that at that time both Jews and Gentiles will be gathered into the fold. But, here is the rub, if Paul circumcised converts, they would then be Jewish, and part of the promise would remain unfulfilled. So, at considerable risk, he insisted upon no circumcision.

For reflection: The early church struggled with whether the Christian community was a part of Judaism or something more.

Signs in the sun and moon and stars

Up to the house of the Lord