The Apostles face the Jewish Council

I will praise you, you have rescued me

The morning after; Peter reneges

An important Resurrection theme is that of forgiveness.

This makes sense once you remember that the last time the disciples saw Jesus was as they fled from the garden of Gethsemane on Thursday evening. Mark relates that moment frankly, “And they all abandoned him and fled” (Mark 14:50). And he adds to that the vivid image of the young man fleeing, leaving behind the clothing by which they had tried to seize him. With that, the followers of Jesus disappeared from the story.

Except, that is, for Peter. He followed Jesus to the courtyard of the high priest, only in time to deny that he knew him.

When we come to the crucifixion, not a disciple is in sight—if we make an exception of the Beloved Disciple mentioned in John’s Gospel. While that intriguing figure is sometimes equated with the author of this Gospel, who in turn is then equated with the apostle John, this would be at best a supposition. On the whole, the crucifixion scene is one of Jesus’ abandonment, except for some of the faithful women looking on from a distance. 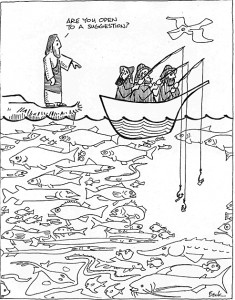 But now we come to the time when the crucifixion has given way to resurrection. The disciples meet Jesus again. The appearance of the risen Jesus in the upper room where the disciples are gathered is a moment fraught with implications. There are so many things that Jesus could be saying. (I sometimes project our cultural patterns upon him, and imagine him say­ing, “I would like to meet with each of you individually for fifteen minutes.”) Instead we hear: “Peace be with you.” And: “Whose sins you forgive they are forgiven them.” One imagines that this is a moment of considerable relief, equal to the wonder caused by the appearance itself.

And then there is the case of Paul, with his encounter on the road to Damascus. He had been persecuting the church. But that is over now. He is greeted in a vision, invited to become a follower of the one he has been trying to banish from the common memory. For Paul, this encounter is a moment of conversion and call. But it is also a moment of forgiveness.

Today, however, we place the focus on Peter. The occasion is the morning after. A friend calls this the “first breakfast,” evoking the fateful night of the ‘last supper.” We see the fishermen at sea, as if they are uncertain what to do. And so they fall back on their habitual practices. But once they recognize Jesus, their excitement carries the morning.

But then comes the moment of reckoning. It seems evident that this three-fold question asked of Peter serves to revoke the denials made earlier. Some would question this, pointing out that the Gospel of John, in whose Gospel this episode appears, only mentions a two-fold denial. However, it seems pretty clear that the pro­gram is to erase the earlier denials. His response suggests nothing more than that of one who is troubled by that earlier failure, and finds it painful to make this new affirmation in the light of it. Not that he is unwilling, but rather that it revives unpleasant memories.

The three questions are the same, though the answers differ slightly. The re­sponse of forgiveness takes the form of “paying it on.” If you love me, feed my sheep. Be a pastoral person. The words of the Lord’s Prayer come to mind. My forgiveness involves forgiving others. It is because I have been forgiven, in fact, that makes my impulse to forgive possible and likely.

Forgiveness is an appropriate theme for the Easter stories, since it also represents a lease on new life. The forgiven are the revived.

Named for mission: solemnity of the Nativity of St. John the Baptist