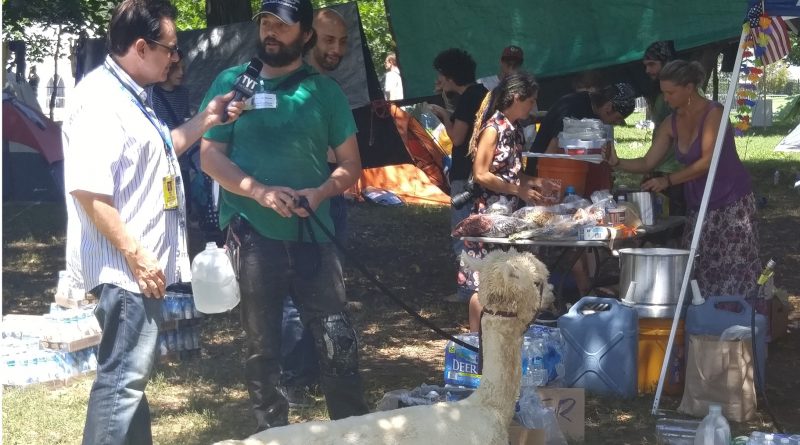 Top Photo: Ethan Abbott and Shay the Alpaca are interviewed by a journalist outside the Democratic National Convention July 27 in Philadelphia.

It’s the most turbulent election year in a couple of generations. You’d have to go back to 1968 — the year Republican Richard Nixon beat Democrat Hubert Humphrey — to find any kind of equivalent to what we’re living through right now. That was the year civil rights leader Rev. Martin Luther King Jr. was assassinated sparking race riots in major cities, Democratic presidential contender Robert Kennedy was also murdered, and the Vietnam War was in full swing. The ’68 Democratic National Convention in Chicago featured violent confrontations between police and anti-war protestors as the Democratic Party split into multiple factions.

Nixon won the presidency by a slim margin, promising to restore “law and order.” A battle against a hostile ideology (Soviet-centered communism) threatened our very existence with the possibility of nuclear war constantly creeping in the background. Does any of this remind you of 2016? The comparison to 1968 is not exact. Instead of Vietnam, we’ve got Afghanistan and Iraq, for example. Instead of communists, we’re fighting radical jihadists. One thing that is exactly the same as back then is the deep sense of anxiety about the future of our nation.

This year’s Democratic National Convention came to my hometown of Philadelphia July 25-28. I went back during that time to visit family. On July 27, my sister and I hopped on the subway line that goes directly to the Wells Fargo Center where the DNC was held. We couldn’t get inside the barriers that surrounded the stadium, what locals were calling “The Wall,” so we walked around outside, spending several hours in and around Franklin Delano Roosevelt Park. The park was the central gathering point for all the protests. I decided to go not to protest anything or advocate for any specific political party, but because I wanted to witness history. I wondered whether 2016’s convention would be a watershed moment, like 1968. What I saw actually encouraged me as a Catholic Christian and as an American. Yes, there were large protests and some minimal clashes with police. There was anger from the “Bernie or Bust” folks, and there were lots of fringe groups trying to stir up something. But the demonstrations were mostly non-violent.

The afternoon I went there, it was very hot and the people and police were, in general, in a calm mood and getting along. My experience that day made me realize a couple of things that have prevented me from giving in to political cynicism. First, Catholics, and in fact all Christians, have a secret weapon when it comes to dealing with the depressing political environment this year. That is hope. I don’t mean hope in a specific candidate or political movement, but hope in Jesus, and in knowing that, if we do our best, God will have our backs, no matter what happens. Second, I also have hope because taking in the scenes outside the DNC reminded me that the greatest thing about our nation is not its political leaders or government institutions. It’s average Americans, who, for the most part, are still decent, kind and moral. Let me tell you about some of those everyday people we encountered in Philadelphia so that maybe your hope tank can get a re-fill.

In a time when racial tensions and friction between the people and the police are high in some places, Tony Luke’s decided to do something generous for rank and file police officers. The well-known Philadelphia company, famous for it’s cheese­steaks and sandwiches, organized a free lunch for the police assigned to the convention area. On July 27, company workers served 300 Italian hoagies (the preferred term for long “submarine” type sandwiches in Philly) to the cops working in the area. The effort wasn’t without some drama. The lunch service was originally planned to happen in FDR Park, but was moved at the last minute due to the protests there. The food service was all about a simple act of charity. It was not a decision to take sides in the contentious debate about the shootings by and against police or the dem­onstrations and riots that have gotten so much attention. 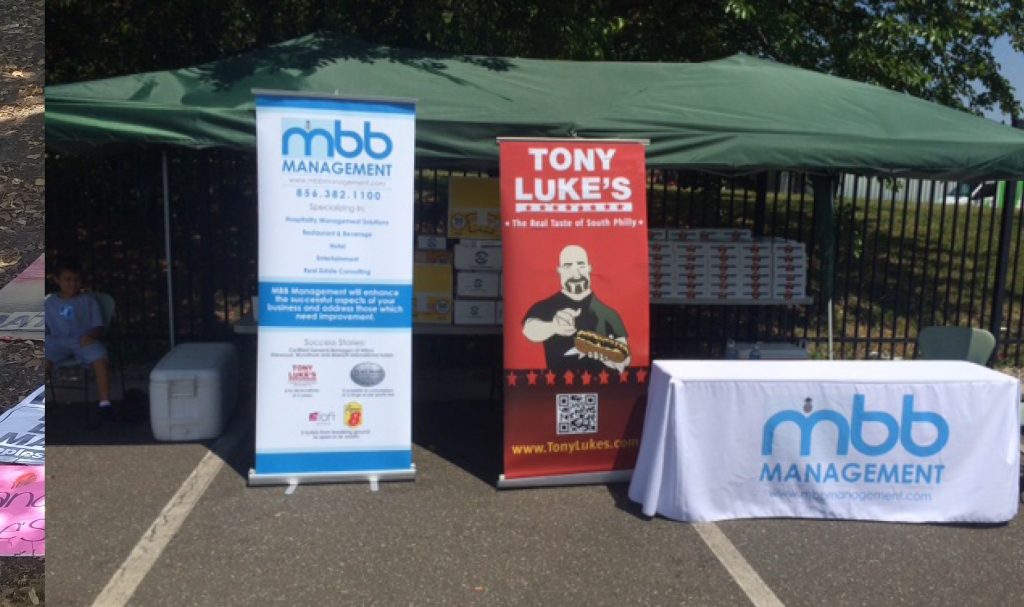 Strolling through FDR park that afternoon, there were all types of activists — some sleeping in tents, some doing art on canvas or playing guitar, some even carrying giant puppet-like depictions of Bernie Sanders or a capitalist banker. None, however, drew as much curiosity as Shay the Alpaca and her guardian Ethan Abbott, known as “Ethan the Farmer.” The alpaca, commonly mistaken for a llama, was calm and friendly. Abbott, a former farmer who is now a full-time activist, walked her around the park. His organization “Just Us Riders,” fights for the survival of small family farms in the wake of corporate corruption in government that he believes is destroying them.

Abbott uses his four-legged friend to start conversations and gain attention for his cause.

“As an activist, if you come up to someone on the street, they may not talk to you,” he said. “But if you have an alpaca, it starts a conversation. If you walk into the FDA (Food and Drug Administration) with a ‘llama,’ they’re bound to ask what’s going on!”

Shay brought a smile to anyone she met in the protest zone. It was amazing to see the power of an animal to bring joy to others.

“Hey, turn off your TV, get off your couch and do something!” Abbott enthusiastically shouted.

I encounter Ryan Kelly as he held a “Gary Johnson for President” sign on the subway. As we traveled to the DNC area, he filled us in on his Libertarian views. The articulate 19-year-old had been coming every day of the convention as early as possible and staying late. At first he was the only Libertarian in the park area, until he found a small group of like-minded people.

“They don’t want the delegates to see the protests,” Kelly explained about the ever-expanding barrier around the stadium. “That’s why they keep moving the wall.”

Kelly had been bravely engaging Bernie Sanders supporters, communists, Black Lives Matter members and others in a dialogue on Libertarian ideals.

“The communists told me they didn’t believe in private property,” he said.

Although he had absorbed some insults, most of his experience was positive. He was featured in a July 25 USA Today story on the protests and had also been interviewed by Michael Che of Saturday Night Live. He took us to meet his tiny Libertarian clan. They explained that Libertarianism had a golden opportunity due to the general dissatisfaction with the major party candidates.

“I think sometime soon, there’s going to be a major breakdown in the two-party system,” said Kelly.

To see a young person who is so passionate about a third party that he was willing to face ridicule in an occasionally hostile environment was inspirational. He and the people he conversed with were living examples of how peaceful political dialogue can happen, despite drastically different views.

Many of the folks in the protest area were disaffected Bernie Sanders supporters upset that the super delegate aspect of the Democrats’ nominating system had effectively put Sanders at a disadvantage. They were enraged when e-mails surfaced from the DNC showing the national committee’s bias in favor of Hillary Clinton. The signs and slogans were creative. A popular one read, “Bernie or Jill, never Hill.” (Referring to Green Party presidential nominee Jill Stein) Other signs, were more divisive, like “Eat the rich — they taste like chicken”

In the park, city officials were giving out free water and there were outdoor showers set up so people could cool off. One woman, a Bernie supporter, stopped with her dog to wet herself down. She was among a number of people we met who were not strongly affiliated with specific parties or ideologies.

“I’m not so much for Bernie or against Hillary,” she said. “I’m against oligarchy. I’m here because I think Bernie was the best chance for a peaceful revolution.” 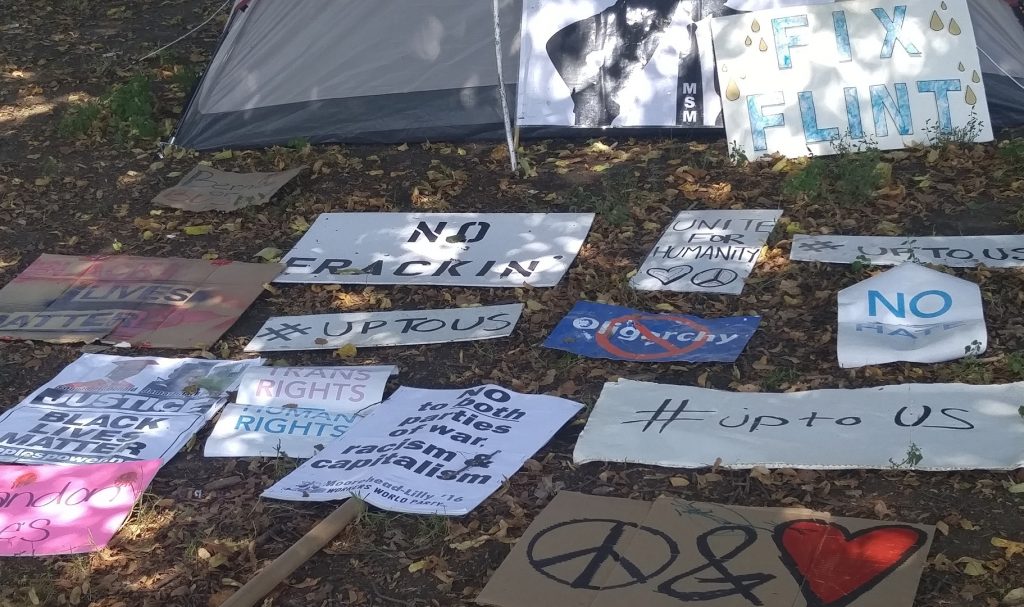 This woman’s remark encapsulated the frustration of many in the nation with the state of our political system and the corruption that seems to be plaguing it. However, like many Americans, she still believed getting engaged in the political process could bring about change. The fact that so many like her still believe in a peaceful solution to many of our nation’s problems was encouraging. As a Catholic, it can seem overwhelming trying to figure out what to do about politics these days and it’s tempting to say, “Hey, I’m just not going to participate. Is it really worth it?”

Well, according to our faith, the answer is yes. The Catholic Church doesn’t endorse any political party or candidates, but it does teach that we have a “moral obligation” to vote and to stay involved in civic life in other ways. (For more information on how to do this, check out Faithful Citizenship for Iowa Catholics at iowacatholicconference.org) I believe our nation is at a critical point, like we were in 1968, but if enough regular citizens, especially Catholics and other people of faith, get involved in the political process, and stay involved well beyond this election, we’re going to overcome our problems and divisions.

Third Song of the Suffering Servant

When does faith disappear?