Peter preaches to the Jewish council

The stone rejected by the builders

We are God’s children now

I am the Good Shepherd 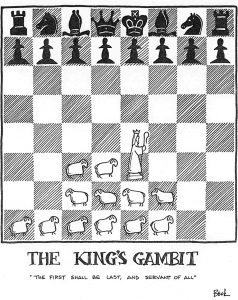 As it is every year, the fourth Sunday of Easter is Good Shepherd Sunday. The lectionary distributes John 10, the chapter about the shepherd, across the three-year cycle. In Cycle B, this year, we are in the central part of the chapter. It is actually this part that is devoted to the Good Shepherd proper. The distribution of passages across the yearly cycles is something like this:

The third of these takes place on a later date (Feast of Dedication, John 10:22). The passage today concludes a section of John that begins in John 9, the story of the man born blind. This is indicated in the next three verses, not included in today’s selection, which refer back to the blind man, (John 10:119-21). This in turn brings to a close one of the largest sequences in this Gospel, the debates on the feast of Tabernacles, in which his opponents try to trap him (John 7:1—10:21). Only the Supper discourses (John 14-17), also featured during the Easter season, form a longer sequence.

Those of the first century were more familiar with the occupation of tending sheep than we are, and for some this would seem to be a problem for our appreciation of the image of the Good Shepherd. But it is probable that the context more valuable for understanding the theme is not so much personal familiarity with a shepherd’s life as it is the biblical theme of the shepherd through time.

The shepherd was an accessible symbol for caretaking, as it involved protecting a vulnerable population from many hazards, often requiring courage and risk in the process. As such, it became a common metaphor for the king. In his famous law code, Hammurabi, king of ancient Babylon (1792-1750 B.C.), described himself as “the shepherd of the oppressed and of the slaves.” And we know that both Moses and David were called from tending the flock (Ex 3:1-2; 1 Sam 16:11-13).

The image of the shepherd also appears frequently in prophetic critiques of the kingship, with particular emphasis on the person occupying the throne at the time (Jer 3:15; Hos 12:2; Zech 10:3). One of the more caustic examples is from the third chapter of Micah, where the leaders are compared to shepherds who slaughter and eat their sheep (Mic 3:1-4). In general, the conclusion of the prophets is that God alone is the true shepherd of Israel, the only one who can truly be trusted.

The prophetic passage that brings most of the prophetic critique together in one place is Ezekiel 34. A sustained condemnation of the human leadership of Israel, this passage has it all. God will bring together the scattered remnants of the flock, and they will finally be safe from the wild beasts. As in the well-known passage from Isaiah 40:11—“Like a shepherd he feeds his flock; in his arms he gathers the lambs, carrying them in his bosom, leading the ewes with care.”

Which brings us to the passage from John’s Gospel. What is new here, unprecedented in the earlier prophetic pronouncements, is that the shepherd is willing to “lay down his life” for his sheep. This note of vulnerability anticipates the stirring opposition, who will not rest until they have him removed. We also see here an early signal that the death of Jesus is an offering, a gift. This will be set out more fully in the Supper discourse, as when Jesus says, “No one has greater love than this, to lay down one’s life for one’s friends” (John 15:13).

For reflection: What virtues are required of leaders?

Reflecting on media literacy for Catholics

I come to set fire to the earth