THE SOLEMNITY OF THE MOST HOLY TRINITY 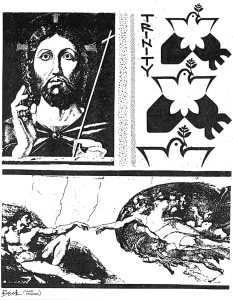 The revelation of the Holy Trinity arrived in stages. In the Old Testament we have belief in the one God; in the New Testament, the three persons, as they affect the faith community. It is only with the Trinitarian Councils in the fourth century that we have the teaching concerning the relation of the three persons among themselves. In the Scripture readings, we are concerned only with the first two of these three moments.

The Old Testament shows us a people that gradually came to the realization of the oneness of God. In the course of its history as a covenant of tribes and then a kingdom, its God was seen as the high God. The existence of other gods was not questioned so much as their powerlessness. God was Israel’s champion over all their neighbors, with their various gods.

It was toward the end of the period of the kingship that things became clearer. The story revolves around the book of Deuteronomy. The northern kingdom of Israel fell to the Assyrians in 721 B.C., and much of their traditions were preserved, later to be included in the Bible as it was composed. That included an early version of a major scroll, the book we call Deuteronomy. Apparently it was brought south and stored in the temple of Solomon, the “attic” of the nation.

According to 2 Kings 22, during the reign of Josiah (640-609), it was discovered and brought forth, propelling a major reform, usually called the Deuteronomic reform. The reform consisted of removing all foreign idols from the temple area, where many had been since the time of Solomon. They also removed all rural shrines of Yahweh himself in favor of the one Temple. The notion was “one Temple for the one God.”

It was not long after the death of Josiah, however, that Jerusalem was conquered by Babylon, and the kingdom came to an end (587 B.C.). Nevertheless, the Deuteronomic reform influenced the people in exile, as they reflected on the uniqueness of God, and assembled the texts that would later become the Old Testament.

Josiah’s reform was a powerful statement toward insisting on monotheism. But a difficulty emerged. When worship is restricted to the Temple, it leaves a vacuum for worship at the local level. God comes into our lives at different levels, in different ways. This vacuum, ironically, is one way in which the Old Testament prepares for the New Testament revelation of the Trinity.

In the Gospels and letters of Paul, we see how the different persons speak to different aspects of our faith experience. Paul speaks in Romans (and Galatians) of God, Christ and Spirit. God is the Creator who made the world, and who was distressed at its history of alienation from him. Through Christ, God entered history and turned it in a new direction, appropriately symbolized for us by the dating of the calendar.

For Paul, the Spirit of God marked the presence of the risen Christ in the faith community, enlivening it, supporting it, as well as providing it with the necessary charisms to make it work. Paul sees God as entering our lives in different ways, a revelation that we have come to understand as the Trinity, further clarified in the councils.

Today, Matthew’s Gospel gives us the only New Testament text that uses the phrase we associate with the Trinity — “Father, Son, and Holy Spirit.” These are the final verses of the Gospel, beginning a new narrative of mission to the world. They are to take the story of Jesus forth into the world, and make it present there. Insofar as Matthew is among them, this Gospel of his is a part of that mission.

For reflection: How do we experience the three persons in different ways?

Whoever is not against us is for us

The blessedness of the beatitudes