THE EPHPHANY OF THE LORD 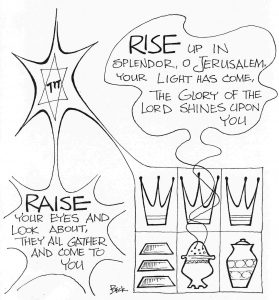 The readings for Epiphany are classics, and one cannot imagine them being different. The gospel gives the coming of the Magi, of course. The others support that story in different ways.

The gospel account of the Magi needs no introduction, in a sense. We all know the story. There are a few things that are not so obvious, however. One of these, in my view, is that this is the beginning of the conflict in Matthew’s telling of the story. The coming of the Magi to Jerusalem, in Matt 2:1-5, with all the city in an uproar, presents a scene that is repeated in Matt 21:10-11, when Jesus himself enters the city.

The two are connected by a chain of events—the realization by Herod that a rival has appeared, the flight of the family into Egypt, the frustrated return because of Archelaus, the son of Herod almost as bad as his father, the settlement in Nazareth, and then, when the time is ripe, the mission in Galilee and finally the turn to Jerusalem.

During Advent and Christmas, King David provided the Old Testament precedent for Jesus. But now with the Magi story, the imagery shifts to David’s son, Solomon. We are invited to remember the visit of the Queen of Sheba (from present day Yemen) bringing gifts of gold and incense (1 Kings 10). There is no mention of myrrh in the Queen of Sheba story. For that we need to turn to the Song of Solomon (1:13; 3:6; 4:6, etc.).

Matthew’s story also has links to Psalm 72, today’s response psalm. Not only do we have kings bearing gifts (Ps 72:10), but also something not as evident, since it is variously translated. But they also did “homage” (Ps 72:11). This key word appears three times in the Magi account (Matt 2:2, 8, 11). As for the “kings,” the Magi are actually Zoroastrian priests adept in astrology and magic (hence the term). But the psalm has contributed the royalty to the Christmas scene.

The psalm is not alone in presenting us with kings, however. The magnificent poem from Isaiah 60, which gives us our first reading, also shows kings bringing gifts. Isaiah 60 was also involved in Matthew’s depiction of the coming of the Magi. We find mention here of gifts of gold and frankincense, as well as caravans of camels and dromedaries. So the camels also find a place in the Christmas scene.

And so the reference to kings is not without reason. The passage from Isaiah shows us why. In placing “kings” is parallel to “nations” (Isa 60:3), we understand that the kings represent their peoples, and this too is a part of the meaning of the feast. It is the “Christmas of the Gentiles.”

This is the explicit theme of the passage from Ephesians. This letter takes the mission to the Gentiles as it primary message. It is seen in the passage for today, where the great “mystery” referred to is the extension of the promise to the Gentile peoples: “It was not made known to people in other generations as it has now been revealed to his holy apostles and prophets by the Spirit: that the Gentiles are coheirs…”

This is different from the other letters of Paul, where the great mystery is the revelation of the new initiative of God, sending his Son to reconcile his estranged human family to himself. Now the focus is more narrowly on the Gentile members of that family.

There is only one thing more. Were there three Magi? And were they named Balthasar, Melchior and Caspar? The passage doesn’t say how many there were, but since there were three kinds of gifts, the tradition is that there were three gift-givers as well. And as for their names, that seems to be an Armenian contribution to the tradition.

For reflection: What does Epiphany say to you?

What is the cost?