Light shines for the upright

I came to you in weakness

You are the salt of the earth 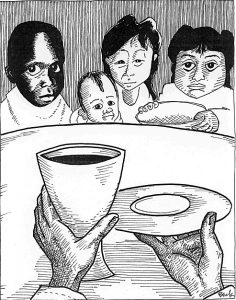 Matthew begins the public life of Jesus with a manifesto. This Gospel has arranged most of the sayings of Jesus in five major discourses, and the first is the Sermon on the Mount, which reads like a manifesto for the minis­try of Jesus. This sermon is among the most radical teachings of Jesus in the New Testament and is often cited to make the point that the Gospel is demanding. The sermon, which runs from chapters five to seven, began last week with the beatitudes. It will provide us with Gospel readings from now until Lent.

Often the texts of Scripture seem like blocks of impenetrable prose that resist our full understanding, as if in another language. It is true that it has its own idiom, but close attention has its benefits.

One opening into the Word is to pay attention to the imagery. On some Sundays, the Scripture readings feature images that carry the message. Today is one of those Sundays. Not only does the Gospel reading talk about salt and light, but the first reading, from Isaiah 58, turns on the images of bread and light.

Sometimes it is easier to explore the images than the language itself. Ask yourself what “light” means in the Gospel. What does it mean in the passage from Isaiah? What does “bread” stand for? What does “salt” mean in the Sermon on the Mount? I am not going to answer these questions for you, since part of the fun with imagery is to explore it for yourself.

Another way to break open the Word is to pay attention to the language and how the grammar works. How many sentences? How do they relate? Since the Old Testament is frequently what we have problems with, let’s take a look at Isaiah’s passage today.

Chapter 58 is often associated with Lent, since it talks of fasting. But what does it say? A beginning is to notice the interplay of IF and THEN. There is a regular pattern in the passage, and it can be traced. (You might put an “If” at the very beginning, to fill out the pattern.)

First four lines: (IF) you share your bread, shelter the oppressed and the home­less, clothe the naked and do not turn your back on your own …

Next four lines: THEN your light will shine, your wound will heal, …

This is followed by another THEN: call on the Lord and you will be heard.

Again, IF: you remove oppression, false accusation and malicious speech from your midst …

And, IF you bestow your bread on the hungry and satisfy the afflicted …

THEN, light will rise for you in the darkness and the gloom become like midday.

Okay, this may have been a bit clumsy, but you get the picture. You can construct the message with these two words, IF and THEN. You will notice that this also helps to see what Isaiah is doing with his images, since he uses other terms as well in place of the particular images.

In other passages, it may be other words. But it is useful to watch for which are the hard-working words. Once this is done, a frequent result is that the passage no longer seems like a block of opaque prose. It takes on a distinct form and shape. It has an argument or a case to make.

One more thing to add. Hebrew poetry uses a technique called “parallelism.” Simply put, after a line is stated, another line repeats the same sentiment, but using different words. It has been called a rhyme of sense, rather than sound. It also rewards tracing, since you find what equivalences the writer proposes.

For reflection: So what did you decide the images meant?

Forming adult disciples in the faith: traveling the road to improvement

Our shadow and our self-understanding