Here I am, Lord

The body is not for immorality 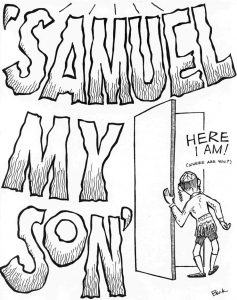 At the beginning of the Ordinary Church Year, the lectionary features Call Stories. Since the Sundays follow the narrative of the Gospel—this year, Mark—it makes an appropriate place to start. We are called into the Gospel story.

However, as every year, we begin with John’s Gospel. Although the lectionary cycles feature Matthew, Mark and Luke, John’s Gospel is not ignored. The early chapters of John open the ordinary season every year. And Lent and the Easter season feature John’s Gospel prominently.

Today’s episode is taken from John’s first chapter. After the hymnic prologue, this Gospel speaks of four days. This is the third. On the previous day, the Baptist announced, “Behold the Lamb of God.” But then it was directed to the world at large (or to the reader). But this time he says it to two individuals who were followers of him. He advises them to go elsewhere in their pursuit of the truth, namely, to Jesus. One of these individuals remains nameless. But the other is Andrew, who in turn recruits his brother Peter. At the end of the day, Peter also is a disciple of Jesus.

The first reading tells of the call of young Samuel. We know that we are to center our attention on his call, not only because it is so elaborate, repeated three times before he gets it right, but also because we do not find what he is called to do. The story stops abruptly when Samuel gives his assent. What he is summoned for is never told, only the summons.

Samuel’s story is one of eager willingness, and has become a model for that within the Bible. Another prominent example would be the prophet Isaiah (Isa 6), equally eager. However, there are contrasting examples as well. Moses is reluctant (Ex 3:11). So is Jeremiah (Jer 1:6). In any case, our first reading tells us that we are to pay attention to the call to discipleship today.

The stories illustrate the diversity of ways in which one is called to be a disciple. There is no standard procedure. However, we can notice some patterns. There are probably others as well, but we can identify two of them today.

First, the calls described today are facilitated by other persons. Clearly so with Peter, who only arrived on the scene because of the diligence of his brother Andrew. About four in the afternoon, we are told, Andrew looked up Simon his brother, and informed him, “We have found the Messiah.” He brought him to Jesus, who in turn said, “You are Simon the son of John; you will be called Cephas” — which is translated Peter.

With the call of Samuel we have the important intervention of Eli. Even though Samuel actually hears the voice of God—three times—he doesn’t know what to do about it until Eli instructs him: “Go to sleep, and if you are called, reply, Speak, Lord, for your servant is listening.”

A second pattern common to these stories is the failure on the first attempt. A second is needed. At that point, they are redirected. Samuel finally learns that he is not to go to Eli, but rather to respond to God. Once he receives some help, he gets it right.

And so it is with the two disciples in the Gospel story. Andrew and the unnamed other person have been following John the Baptist. John, in a generous gesture of humility, directs them toward Jesus. This is somewhat remarkable in itself. And then, being more fully instructed, they leave John and become followers of Jesus.

We don’t always get it right the first time around.

Despair as weakness rather than sin

Behold the Lamb of God

Close the distance not the gate