The loss of Zebulun and Naphtali

The Lord is my light

Rivalries in the Corinthian church 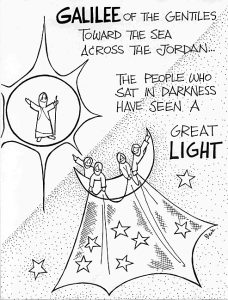 The Gospel reading this week comes with two options, longer and shorter. The shorter version (Matt 4:12-17) does not include the call of the four disciples. But the story of their call by the lake is familiar territory and will allow us to remember past interpretations. But what about the first part, the shorter read­ing? What does that say? That might require some explanation.

Here are four things about it.

First. It is Matthew’s way of marking the beginning of Jesus’ adult ministry. “From that time on, Jesus began to preach …” (4:17). This key phrase will be repeated at 16:21: “From that time on, Jesus began to show his disciples that he must go to Jerusalem …” Here in chapter 4 it indicates the beginning of the ministry in Galilee. In chapter 16, it indicates this part of the ministry is over, and it is time to move on to Jerusalem.

Second. Jesus begins with this inaugural message: “Repent, for the kingdom of heaven is at hand” (4:17). This repeats exactly the first words of John the Baptist, at 3:2. Matthew is telling us that Jesus is beginning in sync with John. However, the Gospel will show Jesus moving beyond what John is saying in dramatic ways.

This reminds us of the differences we saw in Advent, when Jesus answered John’s query from prison. Where John was looking for decisive judgment, Jesus points to the healing miracles that are taking place. Also, in the parables of Matthew 13, we see that Jesus preaches a judgment that is deferred until the end times, and not immediately, as John had thought. So Jesus begins at the same place as John, but quickly takes the mission elsewhere.

Third. Matthew tells us, “He left Naza­reth and went to live in Capernaum by the sea” (4:13). This is the second time that this Gospel mentions Nazareth. The first is at 2:23, when Jesus first went to Nazareth as a child guided by his parents. In the meantime, he has grown to adulthood. But Matthew shows no interest in the time Jesus spent in Nazareth. He only tells us (1) that Jesus went there as a child, and (2) that he left there to go to Capernaum as an adult. This will be his center of operations, as it were, during his Galilee ministry.

Fourth. The quoted lines of Scripture are from Isaiah 8:23 (or 9:1, in some Bibles). This statement leads into the poem in Isaiah 9:1-6, which we associate with the Advent season. The familiar opening lines will remind us: “The people who walked in darkness have seen a great light; Upon those who lived in a land of gloom a light has shone.” Introducing the poem, we have today’s words about the tribal territories of Zebulon and Naphthali.

Isaiah is referring to the loss of the north­ernmost tribal territories. This happened in 735 B.C., in the first hostile move of the great Assyrian empire against Israel. Later, in 721, the entire northern kingdom of Israel would be conquered and reduced to nothing.

Contemporary archaeological digs have found that the northern territories were not repopulated with Judeans until only a few generations before Jesus. It would come to be known as Galilee, the “circle” of nations. The families of Joseph and Mary would have been part of the movement to repopulate the area, with other citizens of Judea.

Matthew seems to be making a point here about the ministry to come. He is saying that in his public ministry Jesus is recapitulating the history of loss experienced by Israel. His retrieval begins where the losses themselves began. He is removing the blight upon Israel, step by step.

For reflection: How might it help to see Matthew’s larger plan?

Many gifts but one Spirit