Teach me your paths

A man had two sons 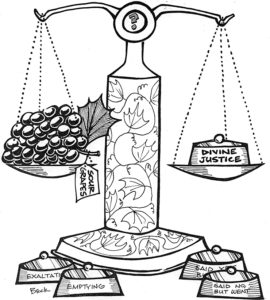 The parable of the two sons is found only in the Gospel of Matthew. It appears in two forms in the different early Bibles, however. All compare the son who said, yes, he would go into the vineyard, but didn’t, with the son who said, no, he wouldn’t go, but instead did. But they differ in the order in which they present them.

In either case, these are only two of the possibilities. A logical square would tell us that two options that are ignored are the son who says, yes, and does, along with the son who says, no, and accordingly, doesn’t. What we have, as a result, are two examples of actions contradicting words.

The parable is rather short, and the application it receives in the Gospel text is almost as long. The son who talked well, but failed to follow up, is likened to the chief priests and elders of the people, to whom Jesus happens to be talking. On the other hand, the son who verbally rejected the father’s offer, but changed his mind and went to the vineyard, is compared to tax collectors and prostitutes. In both cases, Jesus cites the manner in which they responded, or did not respond, to the preaching of John.

How does all of this work?

It helps to have in mind the political situation to which Jesus refers. The land of Judah was under occupation by the Roman army. It was a colony of Rome, headed by a Roman governor, who in the time of Jesus was Pontius Pilate. John the Baptist and the chief priests and elders represented two different Judean stances regarding this situation. The priests and elders were the Judean leaders who were cooperating with the Romans, no doubt with the rationale that their involvement could do something toward mitigating the impact of the foreign presence in the land. Of course, there was always the personal aspect as well. They had class positions to protect, and this kind of an approach would help that cause.

Meanwhile, John the Baptist was a prominent figure among many who made concerted protests to the state of affairs. The Gospel reports his death as the assassination of a vocal opponent to the rulers. Other historical accounts support this. There were many like him, though not as prominent. Some popular protesters took up arms. The Gospels name them “false messiahs.” However, in John’s case, and other like him, it seems a classic example of silencing the prophet.

What then about the tax collectors and prostitutes? The tax collectors were despised for their role in gathering revenue for Rome. Typically, the collector would be assigned a certain amount, and how he got it would be up to him. He was hated not only for taking good people’s money, but especially since it was for those considered an enemy presence in the land. Why would a person take up such a unpopular occupation as tax collector? Greed and opportunism may have had its part. But do not underestimate the pressure that difficult economic circumstances can exert on people.

As for the prostitutes, one can understand that this might also relate to the presence of an occupying army. And for similar economic reasons. This is an occupation that probably was not taken out of a sense of vocation.

The response to the Baptist varied, then. Those who publicly were aligned against Judean tradition heard him, and changed their ways. Those who were supposedly their leaders, did not see a need to consider changing their ways. They were the leaders, and John was a problem for them, as they saw things.

Of course, Jesus is not attending simply to economics and politics, but what God wants for his people.

For reflection: How is the biblical picture similar to today?

From the depths I cry