The universe as a grain of sand

All your works give you thanks

Ignore false reports of the End 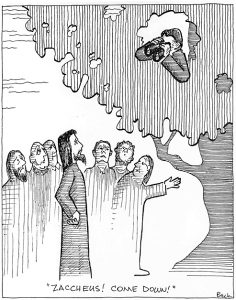 The appearance of the reading from Second Thessalonians reminds us that the church year is moving along, since the letters to the Thessalonians, with their teaching about the end times, are chosen to close out the Ordinary Time each year.

But the story of Zacchaeus dominates the readings today. While the reading from Wisdom places his story in the context of general thoughts about mercy, the parable gives us an actual story.

Zacchaeus stands at the end of the road to Jerusalem. Luke has inserted this story before the triumphal entry into Jerusalem, and after the blind man of Jericho, the last encounter in the other Gospels. Of course, we will skip the entry in the sequence during the cycle of Ordinary Sundays, saving that for Holy Week.

Zacchaeus is a tax collector, and more. He is a chief tax collector. Luke commonly notes degrees of authority. For instance, we have, in increasing expertise, Pharisees, experts in the law and teachers of the law. Similarly, we have mere soldiers, centurions and tribunes. And now we see something similar with tax collectors. Luke Timothy Johnson, in his commentary on Luke, tells us that tax agents seem to have been largely collectors of indirect taxes through tolls, under the supervision of chief tax agents such as Zacchaeus, plus imperial regulation. They were scorned by the religiously committed, not the least because we have a Jew working for the Romans.

The story plays with distances and heights. Ordinarily, we are not told how tall people are. In fact, we are given no physical descriptions. But in this case, we are told because it is necessary for the story. Because he is short, he needs to climb a tree.

But this places the tax collector in an interesting position. He is above the crowd, observing. He is removed, at a distance, and not part of the crowd of people. It reflects his social position as well. He looks on from afar, making assessments and judgments. He imagines he is removed from the hustle of the crowd, and then Jesus calls him out. Suddenly he is not an observer of the scene, but at the center of it. He is startled, but responds gracefully, in the fullest sense of that word.

The word “today” appears twice in the story—in verse 5, “Zacchaeus, come down quickly, for today I must stay at your house,” and verse 9, “Today salvation has come to this house.” This reflects the immediacy that the tax man experiences. Suddenly it is no longer a theoretical, distant possibility, but “today.” It is always “today” when the call comes and the response is required.

Two recent stories relate to this one. First, there is last Sunday’s parable of the Pharisee and the tax collector. At that time, the Pharisee got most of the lines. Today we hear from the tax collector. He is the most recent in a line of key persons in this Gospel representing repentance, which is his antidote to adherence to the law as a route toward salvation. Peter begins the series, at his call (Luke 5:9). We have a woman who washed Jesus’ feet (7:47) and the parable of the prodigal son (15:21). There are others, including the good thief (23:42)—all only in Luke.

The other story brought to mind is the young man, but presented as the rich “ruler” in Luke. The title is similar to that of Zacchaeus. That story is also a call story, though a failed one. That one could not bear to give up his wealth, in conspicuous contrast to Zacchaeus.

For reflection: Luke’s theme of hospitality is another aspect to this story. How does it contribute to the account?

Let us love one another