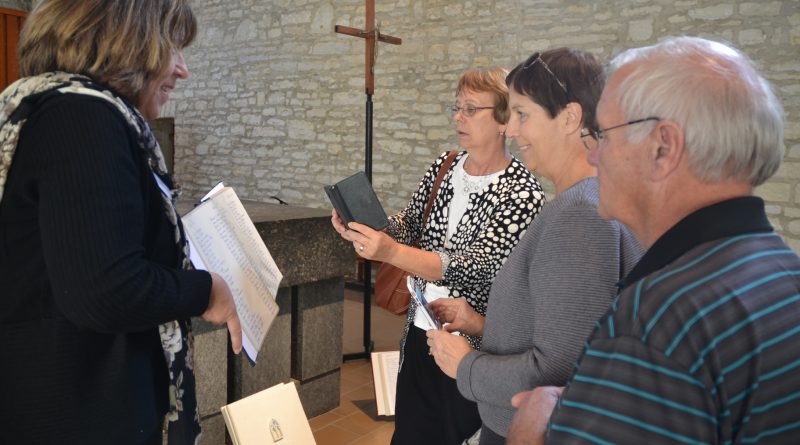 Hundreds from around country come to monastery

PEOSTA — Theresa Marie Sloat-Elliot was an actress, singer and filmmaker who loved veterans and the military, using her talents to serve them. She was also a woman of great faith. Theresa Marie and her husband, ­Robert, wanted to visit a monastery, a trip they planned to do together. That’s how they learned about New Melleray Abbey in Peosta, home to a group of Trappist monks.

After Theresa Marie was diagnosed with cancer, the trip was put on hold. On Oct. 14, the 56-year-old died of her illness.

“She was a very generous and kind woman,” reflected her husband. He remembers her deep trust in God, even as her health was failing. “She never lost sight of Jesus having his hand in hers,” said Elliot.

Theresa Marie was buried in a hand-made wooden casket produced and blessed by the monks of New Melleray, who operate Trappist Caskets to support their order. For the male religious and their lay employees, the business of making caskets and urns is more than just a business. It is also a ministry dedicated to providing compassionate care to the dying, the dead and their families.

Some time after Theresa Marie’s passing, Robert Elliot received an invitation to the monastery for a Mass of Remembrance “For Our Brothers and Sisters Buried in a Trappist Casket.” The liturgy in the New Melleray chapel Nov. 17 was the first of its kind organized by the monks.

They invited the surviving family members of some of the over 6,000 people who have purchased Trappist caskets or urns since their facility began producing them about eight years ago. Almost 300 people from around the nation, including visitors from as far away as Washington, D.C., and Florida, attended. Many, like Robert Elliot, had lost someone in the last year.

Elliot drove from Wichita, Kansas. The day of the Mass, he held a picture of his wife in his pocket, completing the journey they had once planned together. Elliot was one of many who experienced comfort through being part of the event.

“My dad delivered the Des Moines register for 43 years,” said Kris Fair, as she stood next to her sister Lisa Vogt.

The daughters of Keith Fettkether came to pray for and remember their father who died Oct. 20, 2016, at 73-years-old. New Melleray was on his paper delivery route, so he got to know the monks over the years. Coming to the monastery to buy his casket “just felt right,” said his daughters.

Father Alberic Farbolin, OSB, was lead celebrant of the Mass. In his homily, the priest explained that praying for the dead is a constant part of the monks’ rigorous daily prayers.

“We and our co-workers have been talking about you for weeks,” said Father Farbolin. “Every night at the vespers (evening prayer) as the sun is descending in the western sky, we pray for you and your loved ones who have passed from this world … Every morning, when we offer prayers in the night, we think of you.”

The priest described how the monks rise in the darkness of the early morning to pray, and that each time they are united with those dying or with the family members suffering anxiety as they care for those about to pass. The monks also pray for those suffering grief during sleepless nights.

“We were with you, bearing your anguish in our hearts,” he said. There were many tears among those attending, but also the hope that comes from faith in Jesus and gratitude for the work of the monks and their staff.

“It was overwhelming,” said Dena Kurt, struggling to contain her emotion.

She works for Trappist Casket as a family counselor and, like many at the company, had no idea what to expect when preparing for the event since it had never had been done. The monk and lay employees were surprised by the large turnout.

“There are families I’ve talk to months and months ago,” she said.

After the Mass, family members were able to view a series of books near the altar in which the names of each person who has purchased a Trappist casket or urn are handwritten. The list is organized by date. Many family members took time to find the name of their loved one and photograph it. The visitors took joy in speaking with the monks and their staff. Many attended a lunch following the liturgy. “It was outstanding,” said Kay Wilson of Spencer, Iowa, of the experience.

PHOTO: Dena Kurt, a family counselor for Trappist Caskets, holds one of several books containing names of people who have purchased caskets or urns. A family who came to the Mass of Remembrance Nov. 17 takes a photo of the page marked with the name of their loved one who has died. (Photo by Dan Russo/The Witness) 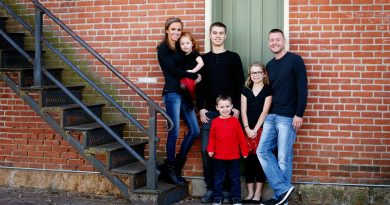 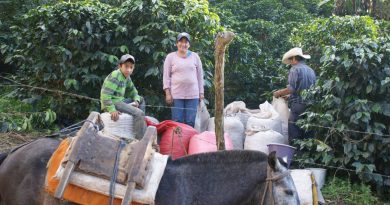