Two priests of the Archdiocese of Dubuque are marking the 50th anniversaries of their ordinations in 2020.

He attended St. Paul School in Worthington, St. Mary School and Aquin High School in Cascade, graduating in 1962. After graduating from Loras College in 1966, he began his theological studies at Mount St. Bernard Seminary and Aquinas Institute of Theology in Dubuque. He completed his studies at St. Mary Seminary in Baltimore, Maryland.

He served outside the Archdiocese of Dubuque, 1970-80, as a temporary member of the Society of St. Sulpice — a community of diocesan priests who educate and form men for the diocesan priesthood. During these years he served at St. Mary’s Seminary, Baltimore; St. Joseph High School Seminary, Mountain View, California; and St. Stephen’s Seminary, in Kaneohe, Hawaii. During the late 1970’s he also served as a presenting priest on Worldwide Marriage Encounter Weekends and as executive priest of San Jose Marriage Encounter, 1976-77.

In 1980 Father Knepper returned to the service of the Archdiocese of Dubuque. His assignments included: associate pastor of Holy Ghost Parish, Dubuque, 1980-84; team Ministry of St. John Parish in Waterloo and St. Nicholas Parish in Evansdale and part-time faculty of Columbus High School; pastor of St. Thomas Aquinas Church and Catholic Student Center in Ames, 1987-93; pastor of St. Joseph Parish in Bellevue, 1993-99; pastor of St. Anthony Parish in Dubuque, 1999-2010, while also priest supervisor of Holy Trinity and Sacred Heart Parishes, 2004-2007 and St. Mary and St. Patrick Parishes, 2004-2008. He served as dean of the Dubuque Deanery, 2004-2009 and pastor of St. Raphael Cathedral and St. Patrick Parishes in Dubuque 2010-2014. In 2012 Pope Benedict XVI bestowed on him the distinction of Prelate of Honor.

In July 2014 he retired to Villa Raphael and has since assisted with providing the sacraments at local parishes as needed. Throughout the years he has served many terms on the Priests’ Council, on the Worship Commission and as an archdiocesan consultor. He has also served as a chaplain of Teams of Our Lady and as a volunteer for Catholic Charities’ Jail & Prison Ministry.

During retirement Father Knepper has involved himself in various community activities. These include Circles Initiative, the National Association for the Advancement of Colored People (NAACP), Dubuque Chorale, Cathedral Choir, Drug Court/Jail & Prison Ministry, and Hospice of Dubuque’s Board of Directors.

In 2016 he became an associate of the Dubuque Franciscan Sisters, focusing on the area “standing with the poor.” Having been formed by the Franciscan Sisters throughout his grade and high school education, he is honored to share in their special way of life.

Reflecting on the many blessings of the past, Father Knepper said he is deeply grateful to God for his life in Christ and His call to discipleship and sharing in the mission of Christ and the church.

He thanks God for his family, friends, and many people who have prayed for him and supported him throughout his life.  His constant prayer in these last years has been for a deeper inclusivity in the church and in our world, praying with Jesus Christ that all may be one as the Father and He are one in the Holy Spirit, that all may know that we are God’s beloved and live together as brothers and sisters in peace and good will.

Because of the COVID 19 pandemic, Father Knepper has not set a date for a Jubilee Mass of Thanksgiving. He hopes a Mass with beautiful music and full-throated singing may be celebrated later this year or some time in 2021.

Father Carl Ries was born Feb. 19, 1944, in Dyersville, to Arthur and Louise (Goebel) Ries of New Vienna. He is the oldest of 11 children, eight sisters and two brothers.

He graduated from Loras College, Dubuque, in June 1966. He took his theological studies at Aquinas Institute, Dubuque, and St. Mary’s Seminary, Baltimore, Maryland. He was ordained to the priesthood on May 23, 1970, at St. Boniface Church, New Vienna, by Archbishop James J. Byrne.

He served as associate pastor of St. Joseph the Worker, Dubuque, summer 1970.

He was then associate pastor of St. Patrick, Cedar Rapids, and religion teacher at LaSalle High School, 1970-71.

He was secretary to Auxiliary ­Bishop Francis J. Dunn and secretary in the Metropolitan Tribunal, 1971-73; director of the Family Life Bureau in residence at the Cathedral of St. Raphael in Dubuque, 1971-73; and acting spiritual moderator of the Archdiocesan Council of Catholic Women, 1972-73.

He was archdiocesan director of vocations and Propagation of the Faith in residence at Loras College, 1976-84; and associate pastor of St. Pius X, Cedar Rapids, 1984-87.

In September 1976, he was appointed chaplain of the Serra Club and moderator of the Theresians.

In 2003, he became pastor of Immaculate Conception in Charles City and then also became pastor of St. Michael in Nashua in 2005. In the fall of 2009, he completed a 12-week sabbatical at the Vatican II Institute in Menlo Park, California.

“There are countless highlights in 44 years of active ministry,” reflected Father Ries. “Some include being ordained a priest at St. Boniface, New Vienna, my home parish, celebrating the sacraments with so many parishioners over the years, especially the Eucharist on Sunday and so many occasions in their lives: weddings, anniversaries, baptisms, funerals. (I’ve enjoyed) praying and preaching God’s Word and experiencing the Holy Spirit touch lives while listening to the Scriptures; listening to people’s troubles in the office and especially in the sacrament of reconciliation. All very humbling.”

In 2014, Father Ries retired and moved to Dyersville to be closer to his family. In retirement, he has had more time to pray, exercise, be with family and friends, help at the family farm and help with liturgical ministry and sacraments as needed. The priest expressed thanks to the people in his life who have supported him through five decades in ministry.

“Some of the most influential people in my life and call are my dear parents and siblings, extended family,  the Franciscan Sisters from LaCrosse, Wisconsin who taught us,  the seminary priests at Loras College and so many good and faithful parishioners and friends over these 50 years,” he said. “My priests’ support group has been essential over these many decades. I am grateful to the Lord for guiding me these 50 years with the power and presence of the Holy ­Spirit and I ask you to pray in thanksgiving for all of God’s blessings.”

While looking back on his many years of service, Father Ries also took a moment to look ahead.

“Please pray for more young people to be open to the Holy Spirit to follow their call to service and ministry in the church,” he said.

Father Ries had originally planned to celebrate his anniversary of ordination in May 2020, but due to the COVID-19 pandemic, his Mass of Thanksgiving is rescheduled for Pentecost, May 23, 2021 at 10 a.m. at St. Boniface Church in New Vienna, with an open house in the hall after the liturgy. 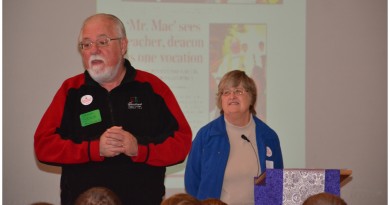