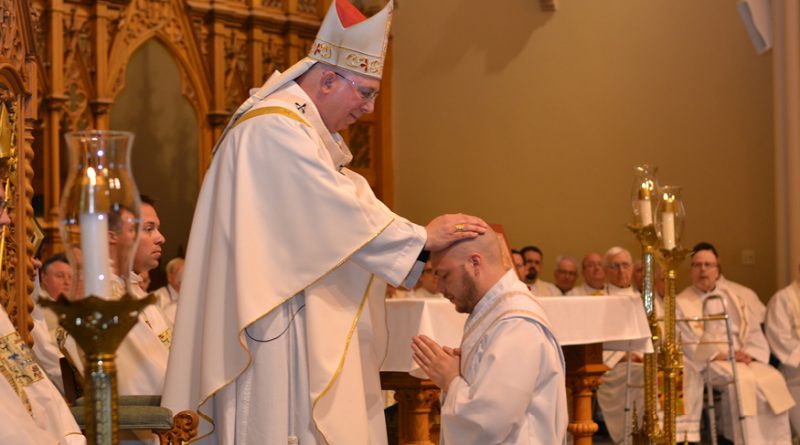 Receive sacrament of holy orders May 26 & 27 in Dubuque

DUBUQUE — As the choir sang “Veni Sancte Spiritus” (“Come Holy ­Spirit”), the priests of the Archdiocese of Dubuque followed the lead of Archbishop Michael Jackels and one after another laid their hands on the heads of the five young men kneeling before the altar of the Cathedral of St. Raphael in Dubuque during their ordination to the priesthood on Saturday, May 27.

In addition to the laying on of hands, other aspects of the ceremony included the five candidates prostrating themselves on the cathedral floor, the anointing of their hands with holy Chrism, their investiture with a stole and chasuble, the presentation to each of a paten and chalice, and the sharing with them of the priest’s sign of peace — a fraternal hug from the other priests of the archdiocese meant to welcome the newly ordained to the priesthood.

During his homily at the morning’s Mass, Archbishop Jackels reflected on the significance not only of a priest’s ministry but also of the manner in which he ministers, in particular the need for him, and all followers of Christ, to offer others a presence of joy.

“To all of us then, and especially to those who lead,” the archbishop said, “the Gospel message might be summed up as, ‘Go out, go last, go low, go joyfully, humbly and with mercy, serving like Jesus.’”

The ordination of the five men was an important occasion, not only for them, but also for their families and friends, teachers and mentors, many of whom gathered with them to celebrate the day.

His wife, Christina Conway, said the ordination had been a “phenomenal” experience for her family, and she was especially touched by the “laying on of hands and calling down of the Holy Spirit.”

“You could just feel the energy,” she reflected. “It was powerful.”

After the Mass was over, many family members and friends lined up in rows in the cathedral to wait their turn to receive a blessing from the newly ordained priests.

Sister Bernadette Morse, of the Sisters of St. Francis of the Martyr St. George out of Rock Island, Illinois, received a blessing from her friend Father Marr, who she has known since both were students at Iowa State University.

The sister said she finds priestly ordinations to be inspiring.

“Participating in a Mass of ordination is an experience of seeing and feeling the love of God,” she said. “Each of these men is given to us, and through them, we are brought to know our God – Father, Son and Holy Spirit. They are willing to give up their lives for us, for God’s people.”

The new priests have been assigned to serve as associate pastors in parishes in the Archdiocese of Dubuque. (See Page 2 of this week’s Witness for an official listing of their parish assignments.)

At the Mass for the diaconate ordination, Archbishop Jackels encouraged the deacons and all Christian disciples to imitate Jesus and live their lives focused on others rather than self. By living one’s life with a “Christ-like, you-centered spirit,” Archbishop Jackels said, “the world is changed and the kingdom of God is built up.”

Following his ordination, Deacon Upah said the night had been an “amazing culmination of many years and a lot of people.”

“It was really beautiful to look out and see all my family and friends who have been so important to my faith and my life and who have gotten me to this point,” he said.

Deacon Rouse, who said he was overwhelmed with emotion following his ordination, reflected, “I go to God with my unworthiness and all he has for me is love and acceptance.”

The transitional diaconate to which the two men were ordained is a temporary state for those who wish to go on to the priesthood. Deacons Rouse and Upah will pursue one additional year of education and formation before becoming priests for the Archdiocese of Dubuque in the spring of 2018.

Archbishop Michael Jackels lays hands on Father Kevin Earleywine during his ordination to the priesthood. By this ritual the ordaining bishop and the other priests invoke the Holy Spirit to come down upon the one to be ordained, giving him a sacred character and setting him apart for the designated ministry. (Photo by Jill Kruse/The Witness)