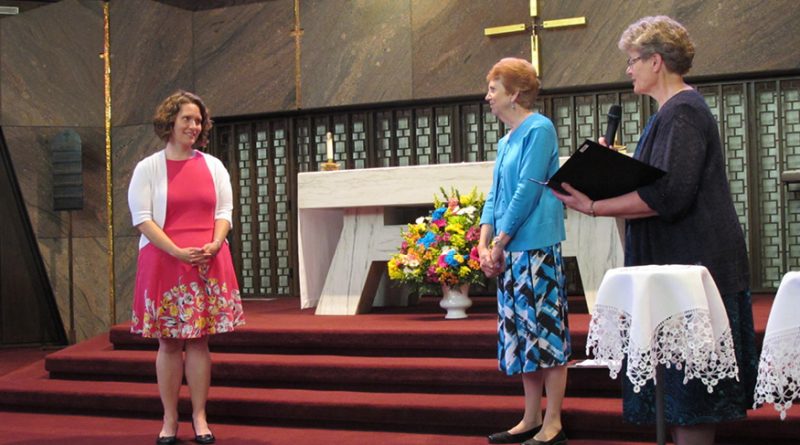 CEDAR RAPIDS — It took time for Marissa Butler to respond, but “God persisted” with an invitation. The ­Waterloo native has recently taken her biggest step yet in following her “desire to become mercy in the world” through a vocation to religious life.

Sister Marissa, as she is now known, was received into the Sisters of Mercy at a June 23 ritual in the Mt. Mercy University chapel in Cedar Rapids.

“It was so beautiful,” she said. “I was just very at peace during the ceremony and felt so supported and loved and filled with hope at the future of the community.”

Family, friends and members of her religious community looked on as the 33-year-old stood before the altar. As part of the ceremony, Sister Marissa responded to questions on her intentions and was later signed with and received a cross.

“It is with immense joy that I, on behalf of the Sisters of Mercy, introduce Sister Marissa Butler as our newest Sister of Mercy,” stated Sister Laura Reicks, RSM, president of the Sisters of Mercy West Midwest Community. “We welcome Marissa into the novitiate. This day affirms that God continues to call women to religious life.”

Sister Marissa, one of Michael and Michele Butler’s five children, didn’t know any women religious growing up as a student at Blessed Sacrament Parish’s Elementary School or at Columbus Catholic High School in Waterloo, but involvement in Catholic youth groups and other church-related activities was a staple of her early years. When she started at Mt. Mercy University, an institution of higher learning founded by the sisters, she became active in campus ministry. It was through this that the young woman first became acquainted with the sisters who ministered in the area and lived at Sacred Heart Convent. In college, she completed two service trips where she volunteered with the sisters’ ministries.

Sister Marissa graduated from Mt. Mercy in 2007 with a degree in religious studies and went on to obtain a certificate in pastoral studies at St. Xavier Uni­versity in Chicago. She then earned a graduate degree at Loyola University. From 2007-10, she was a graduate teaching assistant working in campus ministry at St. Xavier University. From 2010-15, she ministered as a caregiver at Misericordia Home, a home for individuals with developmental and physical disabilities founded by the sisters. She wanted to finish her education and experience other aspects of life like dating but was gradually drawn to the Mercy Sisters’ charism.

“I just kept feeling like something was missing,” she said. “I was denying what God was calling me to.”

In 2011, Sister Marissa became an associate of the order. She began to formally discern a vocation to religious life. Father Tom McDermott, pastor of her home parish, began asking parishioners to pray for her, even during the intercessions at Mass. When she was on a discernment retreat, children at the parish school, and other members of the Blessed Sacrament Parish community, sent her notes of encouragement.

On June 20, 2015, Sister Marissa entered the Sisters of Mercy as a candidate and moved to California where she lived with the sisters there, continued to discern her calling and worked at a Catholic high school founded by the order. She later became a chaplain at Mercy Hospital in Joplin, Missouri, an institution that is part of the sisters’ health care ministry.

Along the way, Sister Marissa credits the writings of Father James Martin, SJ, on his vocation and other topics, and the support of other Catholics who created a culture that encouraged discernment of vocations for helping her.

“I am beyond grateful for the support I have from my family, Blessed Sacrament Parish and the Sisters of Mercy as I have responded to my call to religious life,” reflected Sister Marissa. “God has revealed himself to me through all of them as they encourage me and love me on this journey of Mercy. Their participation in my discernment has carried me through both joyful and challenging days which has been a beautiful witness to how we are each called in baptism to live our faith, serve others, and to build up the body of Christ, the church.”

Sister Marissa will go through two more years of formation as a novice before making first vows (also known as first profession) of poverty, chastity and obedience. Sisters of Mercy also vow to serve the poor, sick and ignorant. Several years later, she will make her final vows.

The Institute of the Sisters of Mercy of the Americas consists of about 2,600 sisters and about 3,300 Mercy associates, according to materials provided by the community. They sponsor health care and education systems, including in the Archdiocese of Dubuque, and are involved in many other charitable efforts, such as hospice for HIV/AIDS patients, the implementation of adult literacy programs, and aid and resettlement for refugees.

“I fall more in love with Mercy every day,” said Sister Marissa. “I know that being a Sister of Mercy is how my gifts can best be used in service to our broken world. I am at peace with my ‘yes’ and excited about where this journey will take me!” 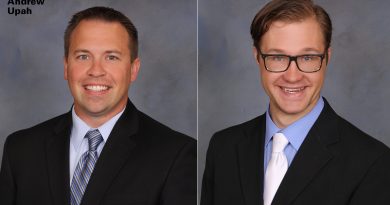 Transitional Deacons to be ordained May 26