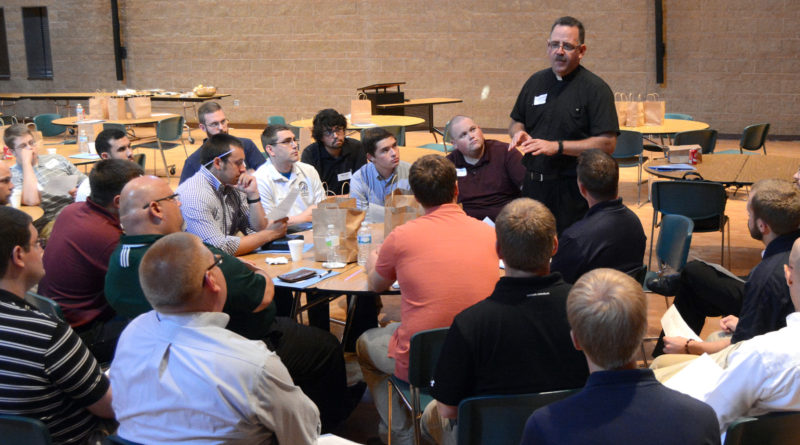 By Anne Marie Cox
Special to The Witness

DES MOINES — About 70 seminarians from all four of Iowa’s diocese visited with each other at the annual statewide convocation Aug. 11-13 at St. Francis of Assisi Parish in West Des Moines.

Keynote speaker Father Ben Bradshaw, of the Diocese of Memphis, focused on the universal call to holiness and what that means for priests.

But hopefully, Father Bradshaw said, there are more benefits to having the seminarians come together than just the talk.

“I think the benefit can be more subtle,” he said. When one combines the gatherings of World Youth Day with some retreats and the convocation, “what happens is people begin to realize, ‘I’m not the only one who believes this.’ They’ll meet other seminarians and other men who are in the same situation.”

The networking can provide a spiritual shot in the arm, he added.

“We’re all people, not machines. We need someone, not just a director, but a peer saying, ‘Hey man, I’m in the same situation,’” said Father Bradshaw.

Vocation Director Father Dave Schatz of the Archdiocese of Dubuque concurred. The connections made during the seminarian convocation are important because the men learn they’re not alone in their ministry and they share the same issues.

“It reminds our seminarians that they’re not alone so when they’re in ministry in Cedar Rapids, Iowa, they know there are priests in Des Moines,” he said. “They have kids coming up to Ames from all these parishes down here. They know (the students) are going back to good priests. They might even know the priests because of this.”

Someday, the seminarians may find themselves serving in parishes along the border of their diocese and across the county line will be a priest from a neighboring diocese whom they know from the convocations, said Sioux City Diocesan Vocations Director Father Shane Deman.

Not all states offer a gathering like the Iowa convocation, said seminarian Jim Goerend of the Archdiocese of Dubuque. A student at Mundelein Seminary near Chicago, he said a number of fellow seminarians at school say they haven’t experienced such a gathering within their states.

The convocation helps seminarians cultivate relationships with each other so that there’s unity and solidarity among the priests in the Iowa province, said Father Dan Kirby, vicar for seminarians in the Diocese of Des Moines.

Another benefit to the joint meeting is a consolidation of diocesan vocations office resources to bring in speakers for the seminarians, said Father Thom Hennen, Davenport diocesan director of vocations.

Father Schatz was grateful to the Iowa Knights of Columbus, who helped make the convocation possible.

Cox is the editor of The Catholic Mirror, newspaper of the Diocese of Des Moines.

Father Dave Schatz, vocation director for the Archdiocese of Dubuque, talks to the archdiocese’s seminarians after the first day of the convocation. (Photo by Anne Marie Cox/Des Moines Catholic Mirror) 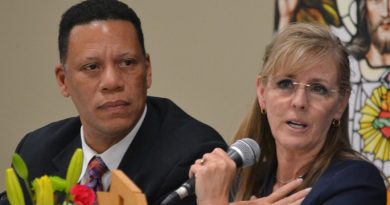