Conduct your affairs with humility

You have a home for the poor

Not Mount Sinai, but Mount Zion

Taking places at a dinner 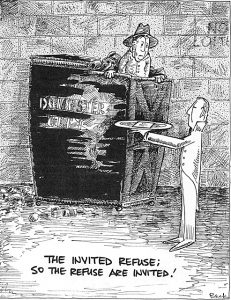 Still on our journey to Jerusalem with Jesus, his followers, some Pharisees debating as we go, and a large and growing crowd. And on the way, one of the leading Pharisees invites Jesus to a dinner.

In the Gospel, Luke shows Jesus addressing, first, the guests. And then he has some words for the host. Our liturgical selection omits an episode concerning the cure of a man with edema (14:2-6), in order to focus on the teachings. It also stops short of continuing the passage into a third teaching item, namely, the parable of the Great Feast. But more of that later.

The theme of the set is indicated in the saying, “Every one who exalts himself will be humbled, but the one who humbles himself will be exalted” (14:11). No doubt this saying is what prompted the selection from Sirach for the first reading.

The sense of reversed positions is a trait of Luke’s writing. We saw it already in the Magnificat, especially in the line, “The hungry he has filled with good things; the rich he has sent away empty” (1:53). But we also recall the Lukan beatitudes (6:20-26), and parables like the Rich Man and Lazarus (16:19-31), among others.

In the dinner stories of today’s reading, we first hear Jesus speaking to the guests, whom he notes are jockeying for the best places at table. His advice, to take the lower places and be invited higher, rather than the embarrassing reverse experience, produces the saying quoted above on being humbled or exalted.

But Jesus doesn’t stop there. He shifts the topic to the matter of sending out invitations, the host’s responsibility. His words for the host are similar in tone, but he widens the perspective. Where at first he was speaking about places up and down the table, he now contrasts those inside and outside the house itself. Instead of inviting your friends and neighbors, who can return the favor later, go out to the highways and byways and invite in those who cannot pay you back.

The phrase used to describe those outside is “the poor, the crippled, the lame, the blind.” It’s the same expression used in the next story, that of the Great Feast. While that parable does not appear today, its influence is felt.

The lectionary editors made a point of trying not to duplicate episodes from one year to another, but rather make selections unique to each Gospel as much as possible. That’s likely the reason Luke’s Banquet parable is omitted, since it had already appeared in Matthew’s account (Matt 22:1-10), in the A Cycle year. However, the versions of the two Gospels are quite different, as a side-by-side comparison shows.

Among the obvious differences is Matthew’s supplement of the parable of the Man without a Wedding Garment (Matt 22:11-14). In fact, Luke’s story is not about a wedding banquet at all. Matthew’s story also refers to the destruction of Jerusalem, as the host interrupts things to wage war against the parties that not only refused the invitation, but also abused his messengers.

However, a major difference is in the account of the subsequent invitations. Luke shows the host sending the servant out twice. First, he goes out into the streets and alleys of the city, to invite “the poor and the crippled, the blind and the lame.” And here we see Luke’s sensitivity to the poor.

But then the servant is sent again, this time outside the city to the highways and hedgerows, to fill his hall. And here we find another concern of Luke’s—willing Gentiles outside Judaism, featured in his second volume, Acts of the Apostles.

For reflection: What are we to make of the reversed positions? Should we worry?

A threat to our decency

The dangers in being a warrior prophet