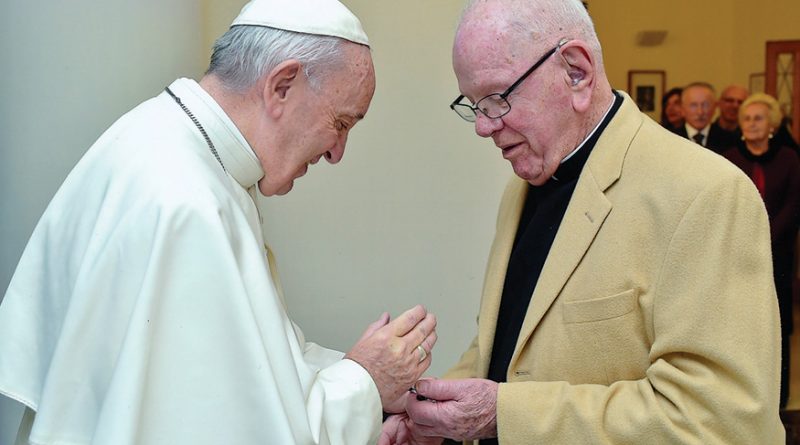 By Father Richard Kuhn
Special to The Witness

FARLEY — On Thursday, Nov. 8, I flew from Dubuque to Chicago. Then it was nonstop, first class to Miami for overnight there. Father Jim McEvery, a classmate from Conception Seminary (Class of 1953) joined me. We were set to complete our celebration of 65 years of Catholic priesthood by shaking Pope Francis’ hand. Jim joined me the next day to board an Al Italia plane for an overnight ride to Rome!

Saturday, around lunchtime, we were being wheeled through DaVinci airport when we met Jon Franco from the Residanza Paul VI, who drove us the some 25 miles to our hotel home for four nights. We had chosen this site for our stay because it was in the Vatican – right beside the colonnade in front of St. Peter’s! Two 90-year-olds didn’t need to walk too far!

The Paul VI residence has 35 rooms – all very small because it had once belonged to a religious order. The first morning we made friends with a couple from Toronto, Canada; Mr. and Mrs. Mel Finlay. He is the national director of Nation at Prayer and is its liaison to the Vatican. He gifted us with copies of the video: “The Gospel of St. John.”

Rested up by Sunday, Veterans Day, we made our way to St. Peter’s Basilica! Hundreds of thousands filled the area in front of the church with a main altar that sits upon the grave of the first pope. One tall Swiss (guard) took us through a side gate, checked us with his metal detector and finally up a winding narrow stairway to this awesome temple of God.

Inside the large crowd was very reverent. Our Sunday celebration’s altar was back of the main altar as far as you could go. The entrance procession included about a hundred priests. Next came about 50 bishops and one cardinal. A choir, off to the left side, led the singing. The principle parts were sung in Latin (Gregorian chants), which we recalled easily from our seminary days and first dozen years of priesthood. The other music was Italian, as were the readings and the half-hour homily! We got out of the church just in time for the Holy Father’s noon greetings and the Angelus with the huge crowd. Though he was way up there in the distant windows, people really happily responded! I found a beggar and gave him the sandwiches I had from the lunch of the day before. I had not helped an old man who asked for help just as we had arrived. This Jesus, in disguise, did not look the same, but surely takes various looks.

Monday, the 12th of November was the long awaited event. Jim and I were both up by 5 a.m. We were at the Holy Office Gate by 6 a.m. No one there! Soon a couple of Swiss guards arrived. At 6:30 a.m., the other concelebrants and a few other lay people were led to the pope’s chapel. We hung up our coats, put on our albs and processed to another room for our red stoles. We were in the pope’s chapel a few minutes before 7 a.m. and could meditate upon the words over the altar: “Veni, Sancte Spiritus. Reple tuorum corda fidelium” “Come Holy Spirit. Fill the (hearts) of your faithful.”

Right at 7 a.m., Pope Francis came from a sacristy upon the left and the cele­bration (in Italian) began. We were all given books to follow the best we could. After the deacon read the Gospel, the Holy Father gave a sincere homily in a very conversational manner.

After the Mass and de-vesting, we returned to the chapel for a few minutes of thanksgiving. Then a single line formed to the hallway where Pope Francesco stood with a trio of cameras to his right! We all met him and were able to introduce ourselves and talk about whatever we wished. Father Jim gifted him with an “Ave Maria” he had composed. I had him bless my Lady of Seven Sorrows rosary, which I had received from (Our Lady of Seven Dolors Parish in) Festina on their 175th anniversary in September. The seven groups of seven beads make it one Hail Mary short of a regular rosary! The pope seemed in no hurry. As you look back, it is difficult to believe this all happened. (The pope) stands well over 6 feet tall, has quite a bit of graying hair and a very warm and gracious smile. He made me think a lot of my own father. That he is! We picked (up our pictures) the following day to prove this really happened!

On Tuesday night, we toured the Vatican gardens and had dinner with (the Diocese of) Madison’s seminarians. The Finlays from Toronto had told us about the bus tour of the Vatican gardens. The gardens are above St. Peter’s. The bus circled the garden for about an hour. We saw where retired Pope Benedict XVI lives. There were great views looking over many shrines and shrubs with the dome of St. Peter’s in the background. More acres than I ever expected!

Our last night in Rome was very special. Father Jim had arranged for us to spend it with the Diocese of Madison seminarians – seven of them. They welcomed us to the new North American College, which is on the Janiculum Hill which overlooks the Vatican. As we toured its hall, I noticed the inscription of the names of those responsible for the college. They included our Archbishop Leo Binz who ordained me in 1953. The rooftop view is stunning! Seminarians live here, but go to many other places for classes. They are in Italian, not Latin as in former days. The student who arranged this send-off event was a deacon named Austin Steffen from Cuba City. He was born in Dubuque, has many relatives in this area, and should be ordained a priest next summer.

The next morning at 7 a.m. our ride from hotel to airport was on time. It was again a long eight- or nine-hour ride to Miami. But we were full of fluid, flawless memories. We had expressed our living support to our Holy Father and had received his personal expression of gratitude in return. Deo Gratias!

Father Kuhn is a retired priest of the Archdiocese of Dubuque who currently resides in Farley. He assists the pastor and staff of the St. Elizabeth Pastorate, which includes the parishes of St. Clement, Bankston; St. Patrick, Epworth; St. Joseph, Farley; St. John the Baptist, Peosta; and St. John, Placid. Read about his ministry here.

Cover Photo: Father Kuhn holds a Seven Sorrows rosary as the pope blesses it on Nov. 12. He intends to give the rosary to Our Lady of Seven Dolors Parish, Festina. (Photo by The Vatican Media Service) 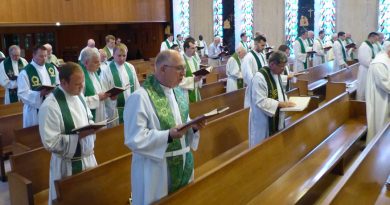 Priests’ convocation: The prophet in your parish