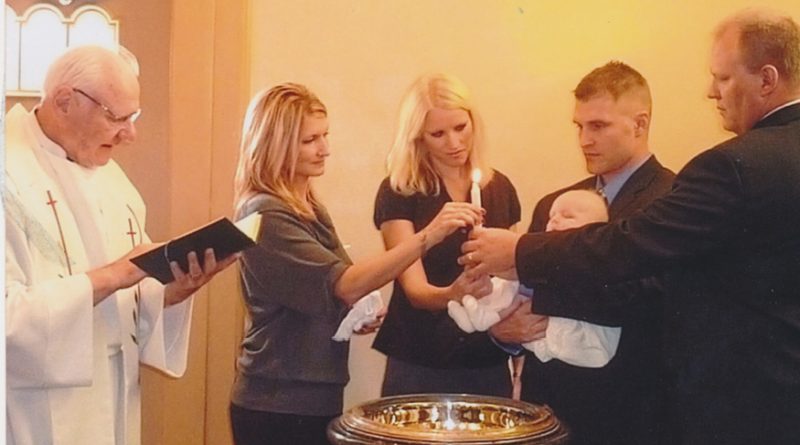 DUBUQUE — Msgr. Russell Bleich has given the majority of his 84 years on the earth in service to the church as a teacher, pastor and administrator. Although he may be officially retired, his work as a priest continues under the banner of an unofficial credo: “I do what I can as long as I can.” 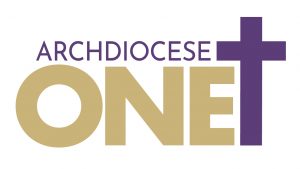 Msgr. Bleich currently lives with about a dozen other retired clergy at the Villa Raphael in Dubuque. Since retirement in 2012, the native of Miller, Iowa, has been a part-time chaplain for the Sisters of the Blessed Virgin Mary and spiritual director for a group of secular Carmelites in Cedar Rapids. He regularly assists at parishes. He is also on a roster of retired priests that routinely visits Anamosa State Penitentiary to provide Mass and confession to Catholic prisoners each week, and he gets involved in retreats and parish missions, among other activities. His ability to stay positive and remain active in his golden years, he says, comes from the joy and hope he finds through faith.

“It’s a Gospel of joy,” he said. “Jesus came that we might have life and have it to the full. It’s all connected with friendship with Jesus.”

The roots of this friendship were planted decades ago in the small town of Miller he called home, where he began his education in a one-room schoolhouse. Growing up, he worked with his brothers and sisters in the family’s country store. He remembers hearing God’s call to his vocation at various times.

“A couple of those incidences were when I was out in the midst of creation, I was just in awe of creation and God and thought I would sure like to serve God if I could,” he recalled. “The second time was my mother helped out at the parish dinner for priests. She came home and said to dad, ‘Martin, I’ve never seen anybody have more fun than a bunch of priests when they get together.’ And that stuck in my mind.”

Msgr. Luke Striegel was a positive influence in the future priest’s home parish of St. Boniface in Garner.

After earning his undergraduate degree at Loras College, Msgr. Bleich attended major seminary at the Pontifical North American College in Rome. He went on to earn a master’s degree in education in 1965 at Creighton University and, later, his certification as a superintendent at the University of Iowa.

Msgr. Bleich started his priestly ministry as an associate pastor and teacher at St. Francis de Sales Parish in Ossian, eventually becoming principal of the school there. He found through these early assignments and others that he enjoyed working with students.

From 1969-1987, Msgr. Bleich served as superintendent of schools, the top administrative post in Catholic education in the archdiocese. During this time, he led initiatives emphasizing the Catholic uniqueness, spiritual mission and identity of Catholic schools. He was chosen to lead a national effort in the implementation of the U.S. bishops’ pastoral initiative “To Teach as Jesus Did.”

After this period, he served as a pastor in Waterloo and executive coordinator at Columbus Catholic High School as well as in several other pastoral and educational roles. In 1999, he was named episcopal vicar of the Cedar Rapids region, one of three vicars who aided the bishop in administration in different areas of the diocese.  Msgr. Bleich received several awards over the years, including the National Catholic Education Association’s Award for Distinguished Services. His final assignment before retirement was as a parochial administrator and priest supervisor at parishes in Cedar Rapids, Urbana, Walker and Vinton.

In recent months, he has participated in the effort to promote the ArchdioceseOne appeal. Current retired priests like him and retired priests of the future are one of four beneficiaries.

Msgr. Bleich believes the appeal — which will help provide for the practical needs of retired priests —  also highlights the spiritual bond between priests and the people they serve.

“The people of God are the bride of Christ, and they’re my bride too,” he said. “I’ve found in the priesthood that God’s people love Jesus and they love their priests. This is all about laying down your life for one another. People do that for their priests too, as well as priests do it for their people.”

Msgr. Bleich baptizes an infant. Since retiring in 2012, he continues to assist in parishes and at retreats and serves in other ways. (Contributed photo) 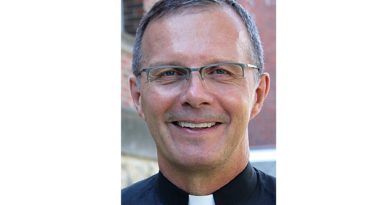