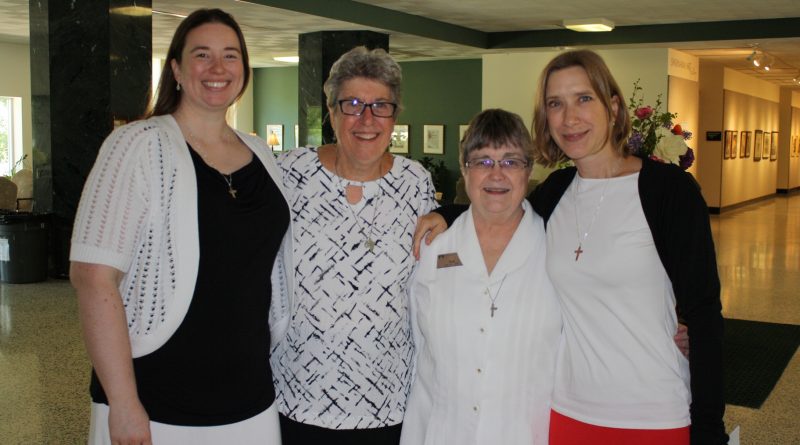 By Eileen Dushek-Manthe
Special to The Witness

SINSINAWA, Wis. — “What do you ask?” “The mercy of God and yours.” With those words, Sisters Quincy Howard, OP, and Nicole Reich, OP, began the ritual of making their first profession of vows with the Sinsinawa Dominican Congregation Sunday, July 30, at the 10:30 a.m. Mass. Prioress Toni Harris, OP, affirmed the newly professed sisters. Sister Toni quoted the “Sinsinawa Dominican Constitution,” saying, “With every new member, ‘we, the congregation, open ourselves to her influence and to the Spirit speaking in her, just as she undertakes continuing conversion into membership. Together, we enter a process of change that carries our past into the promise of the future.’ We welcome your profession!”

“I’m happy to be coming in as a full member now,” Sister Nicole said. At the recent golden jubilarian celebration, she noted how all the professed sisters in the congregation stood to renew their vows, an annual tradition of the congregation. The other sisters were smiling at her and saying, “Next year.” “I’m looking forward to that,” she added.

Sister Quincy said, “I believe religious life is a crucial witness to the Catholic faith. I’m making this commitment because the life I’ve discovered through formation has fed my soul, deepened my relationship with God and helped me to grow as a person. I know the process of self-discovery and deepening faith will continue.” It came as a bit of a surprise for Sister Quincy to find herself entering the congregation. Even though her great-aunt had been a Sinsinawa Dominican, Sister Thomasine Cusack, OP (1905­­­-1978), Sister Quincy’s only other connection was nearly 20 years ago when she earned her bachelor’s degree from Dominican University, one of the congregation’s sponsored institutions in River Forest, Illinois. Now she says, “I’m excited to embrace religious life with temporary vows and hope my continued journey with the Sinsinawa Dominicans is a long one. They inspire me to live and preach Gospel values.”

While Sister Quincy had long-standing connections with the Sinsinawa Dominicans, Sister Nicole’s were more recent. She had reached a point of transition in her life while living in Dubuque. Sister Carol Hoverman, a Dubuque Franciscan, had been inviting Sister Nicole to participate in some of their activities and celebrations. Sister Nicole said, “She must have seen something in me that I didn’t.” But, as Sister Nicole notes, Sister Carol was subtle. Sinsinawa Dominican Sister Rosanna Gleason, OP, also knew Sister Nicole. She inquired, “So what are you doing with your life?” “Looking for a job,” was Sister Nicole’s reply. “I might have something,” Sister Rosanna offered. As things turned out, Sister Nicole began working as a family care­giver with sisters in the Siena Assisted Living area of the motherhouse at Sinsin­awa Mound. “Grace was there,” said Sister Nicole. She worked with the sisters for three years before making her formal entry into the congregation. Sister Nicole laughs as she reminisces about the hints and questions she would get from the sisters. They would say, “You’re single,” and then ask, “Are you Catholic?” Another female employee was getting fixed up with a sister’s great-nephew. Nicole noticed she was not. “We have other plans for you,” she was told. At one point, Sister Frances Therese Murray, OP (1914-2016), straightforwardly asked her, “So when are you going to take the habit?” “The Sinsinawa Dominicans were not subtle!” Sister Nicole laughed. Nevertheless, she kept her discernment quiet so as not to have the focus on her but on her work. She also attended a Dubuque’s Got Sisters weekend to learn more about the area congregations of women religious.

The two sisters have prepared for taking their temporary vows through a year of candidacy and two years of novitiate. Each lived in community with a group of Sinsinawa Dominican sisters and participated in study and ministry during their first year of formation as a candidate. Their second year was spent at the Collaborative Dominican Novitiate in St. Louis as canonical novices. They learned about the Dominican Order, took classes and volunteered in the community. Sister Quincy spent her second year of the novitiate in Denver where she lived with sisters and took classes at Iliff School of Theology. Sister Nicole lived with sisters in Chicago and studied at Loyola Institute for Pastoral Studies, working on her master’s degree in pastoral studies with an emphasis on health care chaplaincy.

Profession brings the next step in their formation as well as deep gratitude. Sister Nicole will complete her degree before moving into a new ministry. Sister Quincy moved to the Washington, D.C., area to minister as a fellow with NETWORK Lobby. Both are grateful for the support they have received from their families and friends, the Sinsinawa Dominican sisters and others in religious life. Sister Quincy’s life as a child in the Diocese of Tyler, Texas, with her parents, JoAnne Cusack Howard and David C. Howard (both deceased), began the journey she continues to unfold. Sister Nicole carries with her the foundation she received in Janesville, Wisconsin, attending St. William Parish and School and from her parents, Rick and Mary (Nettesheim) Reich of Dubuque. Please hold them in prayer as they begin their life as vowed religious.

If you would like to honor Sisters ­Nicole and Quincy on their first profession, go to www.sinsinawa.org/donate. The Sinsinawa Dominicans invite you to learn more about our worldwide Dominican family, the Order of Preachers. For over 800 years, Dominicans have continued to preach the Gospel in word and deed. Today, thousands of sisters, nuns, priests, brothers, associates and laity minister in more than 100 countries around the world. Visit our website at www.sinsinawa.org.

Eileen Dushek-Manthe is an editor/writer for the Sinsinawa Dominicans Communication Office and Office of Development. 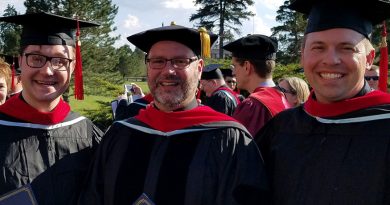 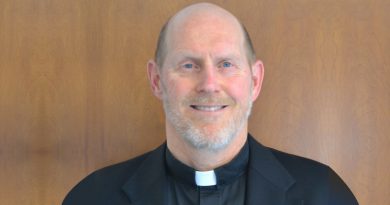 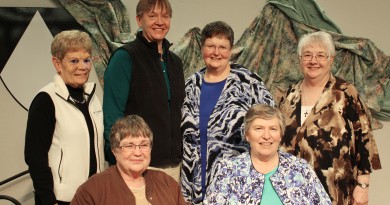