Sister Kay Gaul is the daughter of LaVern and Viola (Wulfekuhle) Gaul of Dyersville, Iowa. With her four siblings she shared chores and fun times on the Gaul homestead farm near Luxemburg, Iowa. She attended Holy Trinity School in her hometown and Leo High at Holy Cross, Iowa. She entered the Dubuque Franciscan community in 1967. She graduated from Loras College, Dubuque, and received her master’s degree in theology from St. John’s University, Collegeville, Minnesota. She taught at Garrigan High in Algona, Iowa; Beckman High School, Dyersville; and is currently a teacher at Wahlert Catholic in Dubuque. She enjoys teaching high school students and has served on many Teens Encounter Christ (TEC) and Christian Experience Weekend (CEW) retreat experiences. “I am filled with deep joy and gratitude. These years have offered me the gift to share the Gospel in community and teaching,” said Sister Kay.

Sister Mary Jane Koenigs is the daughter of Aloysius and Olive (Blake) Koenigs. She and her five brothers and sisters attended Sacred Heart Church and grade school in Meyer, Iowa, and were taught by Dubuque Franciscans. She attended Immaculate Conception Aspirancy for two years before it closed in 1965 and then graduated from Marian High School in Stacyville, Iowa, in the spring of 1967. Sister Mary Jane entered Mount St. Francis on Sept. 3, 1967. After graduation from Briar Cliff University (BCU), Sioux City, Iowa, in August 1971, she attended the University of Northern Iowa and earned a master’s degree in speech pathology in December 1972. She returned to BCU in March 1973 and has ministered at the university since that date. She was a faculty member and chair of the Speech and Hearing Science Department for eight years; the coordinator of the Learning Resource Center for one year; and has served as the Technical Services Librarian in the Bishop Mueller Library since July 1981. “Growing up I saw joy in the faces of the sisters who taught me. I wanted to experience that same joy,” said Sister Mary Jane. “Deep inside of me I thought that the gifts God had given me could best be shared as a Dubuque Franciscan.”

Sister Nancy Miller, daughter of Kathryn and Roy Miller, grew up with four siblings on a farm near Walker, Iowa, and attended All Saints Church in Rowley, Iowa. She graduated from North Linn High School and the University of Northern Iowa with a degree in social work and a minor degree in Spanish. After working a year in Colorado, she entered the Sisters of St. Francis of Dubuque where she made her promises on Aug. 4, 1979. She has ministered as a social worker in Dubuque and a social justice coordinator in Blaine, Minnesota.  She served as a pastoral associate at Corpus Christi Parish in Chicago, during which she earned a master’s degree from Boston College and professed final vows on April 16, 1988.  She has ministered as director of religious education at Nativity Parish and as adult faith formation director at St. Anthony’s, both in Dubuque.  She was campus minister at Briar Cliff University in Sioux City and then earned her master’s degree in Franciscan studies at St. Bonaventure University in New York. Sister has served as vocation minister for her congregation and is presently the spirituality director of the Franciscan Peace Center in Clinton, Iowa. “Celebrating jubilee is an awesome gift, and it has been an incredible journey!” she said.

Sister Ruth Schock was raised on a farm near Estherville, Iowa, where her father, Lyle, currently lives. Sister Ruth’s mother, Mary, passed away in 2007. After teaching five years, Sister Ruth entered the Sisters of St. Francis in 1977 and made final profession in 1986. She earned her bachelor’s degree from the University of South Dakota and her master’s degree and doctorate from the University of St. Thomas, St. Paul, Minnesota.  After serving several years as a teacher and principal, she currently teaches in the Education Department at Briar Cliff University, Sioux City, Iowa, helping to prepare the next generation of teachers. “God has been good to me in many ways, but the call to live religious life with the Sisters of St. Francis has been the greatest gift of all,” said Sister Ruth. 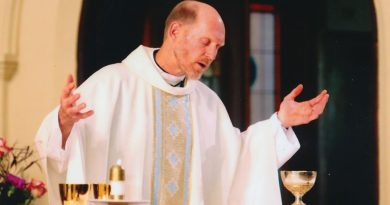 Birth of a bishop: Msgr. Zinkula on his priesthood, coming challenge