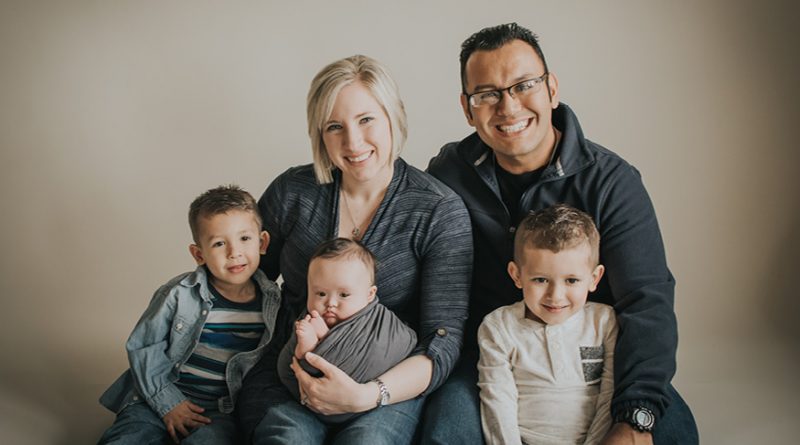 By Abby and Rolando Morales
Special to The Witness

Our mutual faith and love of and for God was what immediately attracted us to one another. Rolando was discerning priesthood when we first met. Through much prayer and spiritual direction, Father Ken Glaser encouraged Rolando to date so he could be certain of his vocation. And so we did. We prayed together, and we both attended spiritual direction individually in order to grow in our own faith lives and prayerfully discern our callings. Through ongoing prayer, Rolando experienced God speaking to him through recurring dreams of being on the altar with his wife and children in the front pew. As much as he knew he wanted to serve God and his people, Rolando could now be certain of his vocation, to serve God in the church, but with his wife by his side as a permanent deacon. This was something that we both felt called to, but knowing the age restriction, we focused on building our family and life together while being open to God’s will.

Our dear friend Dominic Hogan told us about an informational meeting regarding the permanent diaconate. Knowing that Rolando wasn’t old enough, we still wanted to go and learn more about the diaconate formation process. To our surprise and excitement, we learned during that meeting that Rolando would be old enough upon ordination, and we could still apply. At the time of our application, we had two young children, Abby was working on her master’s degree, and we were also in the adoption process. Did it seem like a lot? To the outside world, yes, but not to us. We knew that whatever God called us to, he would carry us through. We had come to learn in our married life, that when we were open to God’s plan, our lives became more fruitful than we could’ve hoped, and so we continued to stay open. (It was no surprise to us when we explicitly learned that being open is critical to diaconate formation.) Our emotions were hopeful, but not nervous, because we had talked to Deacon Len Froyen and his wife, Gail, who helped us understand that a vocation is a lifelong calling, and that if the formation board felt that now was not the right time, God would continue to pull at our hearts.

In reality, the application process for the permanent diaconate was profoundly similar to that of the adoption process — essay, background checks, psychological testing, etc. — so it really didn’t faze us.

The day after Thanksgiving 2016 was a little crazy to say the least. Family from out of state was flooding in to visit for the holiday, and just as they were walking in the door, Father Paul Baldwin sent Abby a text message saying congratulations. At receiving that text, she told Rolando to run to the mailbox and get the mail. He was taken aback and, without shoes, ran down the lane to the mailbox. He brought in the letter, and we opened it together, with tears in our eyes that we had been accepted to formation. The very next day was our second son’s third birthday and the day that changed our lives forever when we got “the call” that we had been longing for. Alan’s birth parents chose us as his forever family. We didn’t have much time to process what this would mean for diaconate, as we were in Maryland within four days to meet our son. During the two weeks in Maryland, Abby got a job teaching online, meanwhile completing her final semester of her master’s degree. Upon returning from the holidays with family, Alan was hospitalized with RSV and pneumonia. He was still in the hospital for our first day of formation.

Abby’s dad was able to stay with Alan in the hospital so we could attend the class. On the way to our first formation class, we were pretty overwhelmed and filled with concern for our sick baby. We prayed that God would help us know if now was the right time to begin formation or if we should wait. The class was completely mind-blowing, and we were so filled with God’s love, as we were part of 17 couples who were on fire for serving the Lord. Signs seemed to be all around us, including Deacon Len Froyen as the day’s speaker. Deacon Len did Abby’s parents’ Pre-Marriage Cana almost 30 years before, and after the relationship we built with him and his wife during our time at St. Stephen the Witness 10 years ago, everything seemed to come full circle. The focus on “our story” and living a life of gratitude made our hearts so full that we were completely affirmed that we were exactly where we were called to be.

At the very end of that first class, Deacon Tom Lang called us up to the front and asked us to share our story about how the Holy Spirit had been working in our lives and how Alan’s adoption, in the midst of this diaconate application process, came to be. Everyone in the room became instantly aware that the Holy Spirit had joined each of our stories, because diaconate formation Class XIX is truly a family. Alan continues to touch the hearts of Class XIX.

Our other two children, John (age 5) and Joe (age 4), absolutely love “Waterloo Days” since they get to have lunchables and play with the other kids whose parents are in diaconate formation, through the child care available at Blessed Sacrament. It has been incredible to experience the growing faith of our children, just since we began this process a year ago.

There is a lot of reading, but even though Rolando struggled somewhat in school, he is so driven and inspired by the readings we have for formation, because they bring us into a deeper relationship with God and one another. Our families are very supportive of the formation process as well. The friendships we have created with the members of Class XIX over the last year are deep friendships that truly do feel like family.

Abby and Rolando Morales are pictured with their children, John, Joe and Alan. (Contributed photo)

Part 14: How to discover your vocation