OMAHA, Neb. – Sister Carol Tlach, a Notre Dame Sister, is celebrating her 50th jubilee of religious profession. She is the daughter of the late Paul and Emma Tlach of Garner, Iowa. Elementary education and care for senior citizens have filled Sister Carol’s 50 years of ministry. She received a B.A. from Mount Mercy College in Cedar Rapids, Iowa. Within the Omaha Archdiocese she taught at St. Adalbert in Omaha from 1966-68 and at St. Wenceslaus in Dodge, Nebraska from 1985-86.

Sister Carol taught for many years at St. Michael’s in Harlan, Iowa, and from 1986 to the present she has coordinated the St. Mary Senior Citizen Outreach Program in Walsenburg, Colorado. Providing transportation and assistance with daily needs has been a valued ministry for the seniors in the Walsenburg area.

Celebrating 60 years of religious profession is Sister Josita Hanus, daughter of the deceased Leo and Kristine Hanus of Dwight, Nebraska. She received a Bachelor of Arts degree in English with a minor in history and education from Duchesne College. A dedicated elementary teacher, Sister Josita taught in schools in Nebraska, Kansas and 12 years (1983-1995) in Cedar Rapids, Iowa.

Sister Marlene Bakken, daughter of deceased Joseph and Pearl Bakken of Cedar Rapids, Iowa, is celebrating 50 years of religious profession. She received her B.A. in education from College of St. Mary and began her teaching ministry. From 1968-1969 and again from 1974-1975 Sister Marlene taught at St. Adalbert in Omaha. She also taught in other Nebraska and Iowa schools, serving over 20 years St. Wenceslaus in Wahoo, Nebraska.

From 2003 to 2015 she was a para-professional at Holy Family School in Cedar Rapids, Iowa, and currently serves the needy at the St. Vincent de Paul Store in Cedar Rapids. Her dedication for those in need was evident in all of her ministry.

A native of Cedar Rapids, Iowa, Sister Mary Frances Michalec, has been a Notre Dame Sister for 60 years. The daughter of the late Frank and Mary Michalec, Sister Mary Fran has served as a teacher and principal in Iowa schools for most of her career. In the Archdiocese of Omaha, her ministry included: St. Therese Parish from 1958-1961; Assumption Grade School from 1962-1966; St. John Nepomucene in Clarkson from 1966-1967 and as director of the Notre Dame Sisters’ infirmary from 1977-1979.

Sister Mary Fran served at St. Ludmila School in Cedar Rapids, Iowa, for 15 years, as director of religious education for the Regina Elementary School in Iowa City, Iowa, for 26 years and is currently serving as pastoral minister at St. Ludmila Parish in Cedar Rapids, Iowa. Her love for students and creative spirit have enhanced the education of thousands of youth. She received a B.A. in education from the College of St. Mary in Omaha and an M.S. in administration from Boston College University in Boston, Massachusetts.

Sister Mary Hlas, a native of Chelsea, Iowa, celebrates her 60 years as a Notre Dame Sister. The daughter of Marie and George Hlas, she has dedicated herself to teaching and chaplaincy work, receiving a B.S. in biology from Duchesne College in Omaha, an M.S. in counseling and guidance from the University of Omaha.

Sister Mary taught in Omaha and Wahoo, Nebraska and in Spillville and Cedar Rapids, Iowa. Since 1983, Sister Mary has served as a chaplain at Methodist Hospital and the Arch Halfway House in Omaha. She served as a police chaplain from 1982-2008 and an FBI chaplain from 1993-2007. Always concerned about the spiritual needs of others, she has been a dedicated learner so she can walk with others in their need.

Get to know the new deacons being ordained July 20 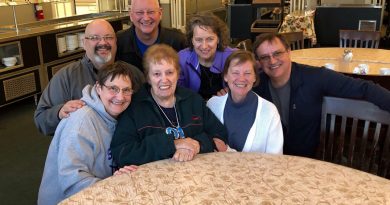